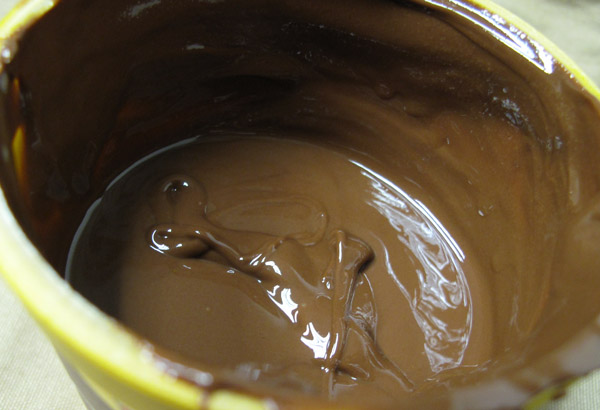 Nutella’s success spawned countless imitators, most trying to mimic Ferrero’s formula and a great many competing against the original on price.  But Nutella also inspired a counter-tradition, primarily within Italy, of premium spreads that hewed more closely to the older, nobler traditions of gianduia.  In the past few years, more of these premium spreads have made their way to the US market.  In the spirit of the Decalogue for Gianduia Snobs, here are seven guidelines on what to look for (and avoid) when shopping for quality gianduia spreads. 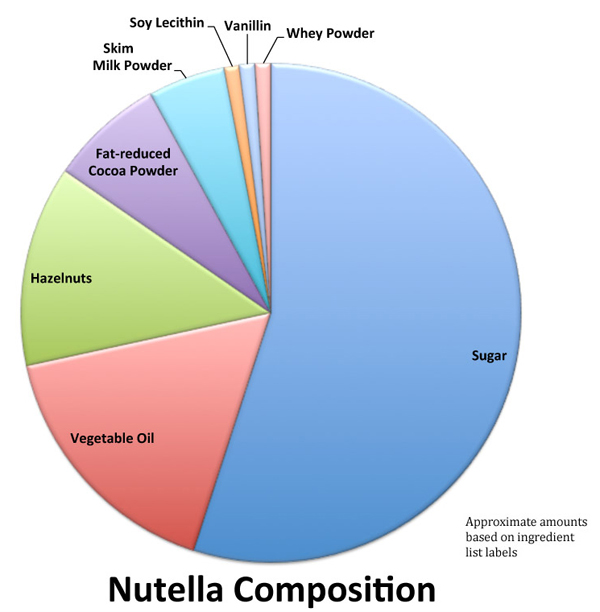 Though Nutella formulations differ internationally, the variations are relatively minor, never altering the essential nature of the product.  By weight, Nutella is roughly seventy percent refined sugar and engineered vegetable fat.  Hazelnut content is a mere 13%.  Fat-reduced cocoa powder is about 7.5% (1).  Milk solids—in the form of skim milk powder, sometimes supplemented with whey powder—range from 5% to 9%.  The ingredient list is rounded out by a bit of soy lecithin (as an emulsifier/surfactant) and vanillin.

Those familiar with the quality indicia of gianduia will immediately recognize much room for improvement in the ingredients and proportions in the status quo established by Ferrero.  In reviewing the label of a premium gianduia spread, here are some useful guidelines.

First, avoid extraneous fats.  A premium gianduia spread—like quality gianduia itself—has no need of any oil or fat beyond that of its key ingredients: cocoa butter, hazelnut oil, and (in the case of milk chocolate spreads) milk fat.  Be wary of spreads with other oils or fats, particularly if they appear early enough in the ingredient list to indicate proportionately heavy use. 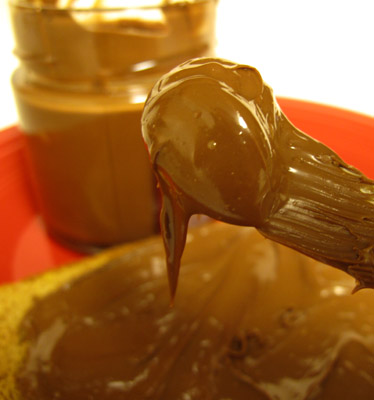 Remember that some of the textural qualities of Nutella and low-end imitators derive from the stabilizing effects of hydrogenated, partially hydrogenated, or interesterified vegetable fats.  Lacking the trick fats, premium gianduia spreads can experience some oil separation.  As with natural peanut butters, this is easily remedied by stirring to redistribute the fats (as shown here).  Also, without the engineered vegetable fats, the texture of premium gianduia spreads varies more across a range of temperatures (e.g., chilled, at room temperature, or when spread on hot toast).  These are minor tradeoffs, in the interest of a superior tasting, more natural spread. 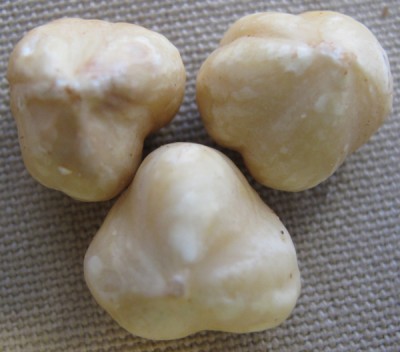 For acceptable flavor and aroma intensity, a premium spread should have at least as much hazelnut content as good gianduiotti, the rule of thumb being about a third.  Many of the best gianduiotti have hazelnut content as high as 40%, leaving them soft, but still solid.  Making gianduia spreadable allows for incorporation of even more hazelnut.  Some makers fashion spreads with hazelnut content over 60%.  More is not necessarily better, though, if the proportions get out of kilter and the spread begins to taste more like hazelnut butter than gianduia. 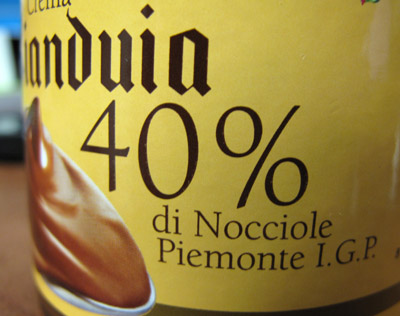 Fourth, avoid artificial flavors.  The most common artificial flavor in gianduia spreads is synthetic vanillin (vanillina).  Italian labeling regulations also allow synthetic vanillin to be included under the catch-all term “aromi” (or “flavorings”), often appearing at the end of an ingredient list.  Look for vanilla (vaniglia) or “natural flavorings” (aromi naturali) in the ingredient list to ensure that natural vanilla is used.

Fifth, beware those that lead with sugar.  European labeling regulations, like those in the United States, require that ingredients be listed in descending order of weight.  When reviewing the ingredient list, pay special attention to the leading ingredient.  Sugar (zucchero) is cheaper than good cacao or hazelnuts, making it the top ingredient in most budget-oriented gianduia spreads.  More often than not, sugar-heavy spreads are quite unpleasant—weak in hazelnut aroma, overly sweet, and tacky (rather than velvety) in texture.  In the best premium gianduia spreads, hazelnuts almost always lead the ingredient list. 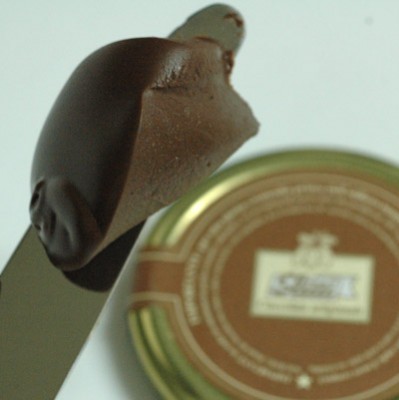 Sixth, remain flexible on cacao solids.  While the use of cacao liquor (or mass or paste) is de rigeur in solid gianduia, it poses a problem in gianduia spreads.  When using cacao mass, maintaining spreadability constrains the proportion of ingredients.  Because cacao mass is high in saturated fat (solid at room temperature), disproportionately high hazelnut content becomes necessary to avoid a dense, fudgy texture.   However, the presence of cocoa butter (bearing little of the flavor or aroma associated with cacao) and offsetting hazelnut content can push chocolate flavor into the background, skewing the desired balance.

In order to simplify the problem of managing the fats for texture without sacrificing flavor balance, most makers of premium gianduia spreads use cocoa powder instead of, or in addition to, cacao liquor.  This is not a cost-cutting measure, but a practical necessity (7).

When it comes to the form of milk in spreads, some makers use whole milk powder, while others use skim milk powder.   Though less common, other forms of moisture-reduced milk may appear on ingredient lists (e.g., whey powder or concentrated butter).  Given the high hazelnut content in premium gianduia spreads, the proportion of dairy ingredients is generally low enough for the impact of milk fat on texture to be negligible.  When reviewing the ingredient list, there’s no need to worry about the particular form of milk powder used.

(3)  Though rarely, almonds (mandorle) may also appear in some premium gianduia spreads.  This breach of tradition was addressed in Part 28 (Rule #7 and accompanying notes) in the context of gianduia.  In the case of spreads, an additional historical wrinkle arises from the fact that Nutella’s precursor products, Giandujot and Supercrema, both supplemented the hazelnut content with almonds (Part 31 and Part 32).  Distant precedent notwithstanding, consumers should generally avoid premium gianduia spreads containing almonds. 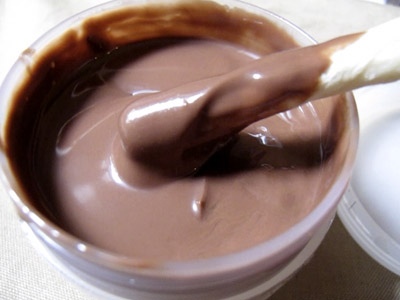 (4)  A dramatic example of this is provided by gianduia master Guido Castagna (whose work was discussed in Part 30).  Castagna makes two premium gianduia spreads: Crema CQ and Crema +55.  Both rely exclusively on Tonda Gentile delle Langhe, the latter with a jaw-dropping 68% hazelnut content.  The eye-opener, however, is Castagna’s Crema CQ, which includes a mere 12% hazelnut content—one percent less than Nutella.  Despite the skimpy hazelnut content, the quality and intensity of hazelnut aroma and flavor beats many spreads with significantly higher content of non-Tonda Gentile delle Langhe hazelnuts.

(5)  Newcomers to this series can backtrack to Parts 20, 21, 22, and 23 for information on the established exceptionality of this cultivar.

(6)  Tonda Gentile delle Langhe grown outside of Piedmont have generally displayed all of the desirable kernel qualities—size, roundness, ease of pellicle removal, and excellent taste and aroma—as those grown in Piedmont.  So far, growers have been unable to overcome the productivity and susceptibility challenges the cultivar has shown outside of its native territory.  Until they do, it is usually safe to assume that TGL (with or without an I.G.P. designation) are grown in Piedmont.

(7)  As mentioned in Part 33, the cost-cutting in Nutella (and other budget spreads) arises from the substitution of cheap vegetable fats (e.g., palm oil) for expensive fats (e.g., cocoa butter and hazelnut oil).

(8)  This is not the case with solid gianduia, where history and tradition favor dark chocolate versions, as discussed in Parts 28 (Rule #4), 27, 26, and 19.  The rise of premium dark chocolate gianduia spreads can, of course, be seen as a return to those older ways.  This is supported by the fact that Ferrero’s Giandujot and Supercrema—the “missing links” between gianduia and Nutella—were also dark chocolate products (see Part 33).