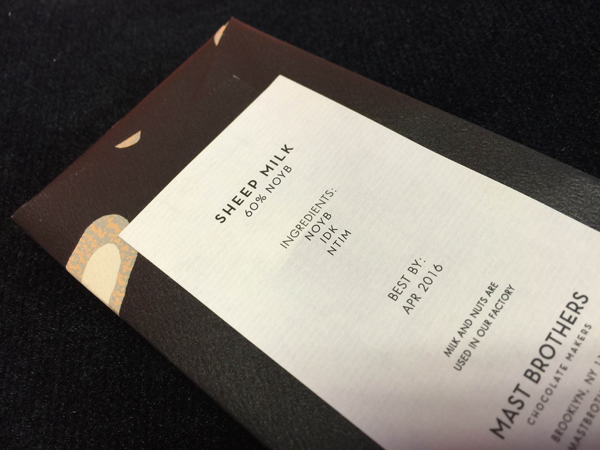 The Mast Brothers have come to be known for making “two ingredient” chocolate, using cacao and sugar only, with no added cocoa butter, vanilla, or lecithin. Recalling a dinner discussion in their Williamsburg apartment before founding the company, Michael Mast writes that, “We didn’t quite realize it at the time, but…we had hit upon a revolutionary idea—handcrafting chocolate using nothing but cane sugar and cocoa beans with varying flavor profiles sourced from around the world” (MBC, 27). After the brothers conducted further study, Michael writes, “We set out to make the most delicious chocolate in the world. A pure chocolate, highlighting the unique characteristics of the beans that farmers worked so hard to harvest and ferment perfectly. A chocolate containing only two ingredients: cacao and cane sugar” (MBC, 28). 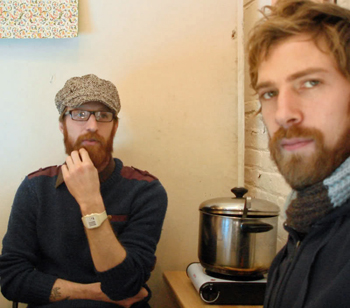 According to the Masts, they realized that vision right out of the gate. In describing the chocolate they claim to have made in their Williamsburg apartment, Michael Mast told Charity Nebbe of Iowa Public Radio, “It was really like tasting chocolate for the first time for us. Just the purity of ingredients, just using beans and sugar. That’s really something that was unheard of” (“The Sweetest Part of Valentine’s Day,” February 14, 2014). Of their subsequent months in the Greenpoint loft, Michael Mast writes, “Our chocolate was made differently from every other chocolate. It tasted different. It used only two ingredients” (MBC, 123).   In early 2008, the Masts took chocolate to Dan and David Barber at Blue Hill at Stone Barns. According to Michael, “[The Barbers] recognized that what we were doing was new. It was different. Nobody had tasted chocolate like ours—no dumbing down of the flavors with added butters, vanilla, or emulsifiers” (MBC, 216).

The claims of originality are spurious. Domori, Patric, and DeVries were all making two-ingredient chocolate before the Masts went into business. (The Masts were well aware of the work of Alan McClure of Patric. In an email to McClure on April 24, 2008, Rick Mast wrote, “I’ve read all of your interviews, etc. and recently mentioned your great work while we were giving a talk at Blue Hill at Stone Barns.”) But what about the Masts’ statements that they “used only two ingredients,” with “no dumbing down” with lecithin, vanilla, or added cocoa butter? For that, we must look to the ingredient lists. As with their equipment, ingredient lists in the Masts’ early years can be broken into three phases: black box; CBVL; and two-ingredient. 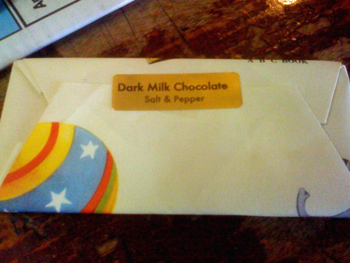 The black box phase began when the brothers commenced selling in late 2007 and continued through the end of 2008. For well over a year, during which they received a barrage of media coverage and distributed to as many as a dozen retailers, the Mast Brothers sold their bars with no ingredient lists whatsoever. Their labels only provided names of bars, often without stating cacao percentage and rarely specifying cacao origin. 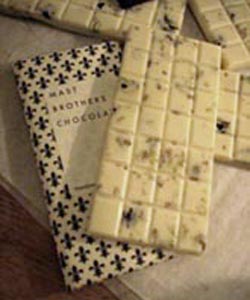 Such absolute opacity about ingredients was unprecedented, at the time, for any company claiming to make bean-to-bar chocolate. It remains unique over the many years since. To better distinguish themselves from remelters, chocolate makers are eager to disclose and discuss their ingredients—what they are, where they’re from, growing methods, fermentation protocols, organic certifications, price premiums, etc. The Masts’ failure to provide the most basic information about their ingredients raised serious doubts about whether they were actually making chocolate. Those doubts were deepened by the Masts’ expansive product line, which included white chocolate, milk chocolate, few single-origin bars, and an emphasis on flavored bars (e.g., salt, pepper, cranberries, pistachios, almonds, pecans, hazelnuts, et al.). The early Mast aesthetic was entirely out of step with that of bona fide bean-to-bar makers (i.e., high-percentage, single-origin dark bars with cacao of meticulously documented provenance). 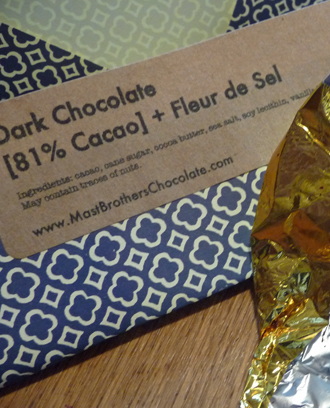 The CBVL phase commenced near the end of 2008 and continued through the middle of 2009, roughly corresponding with the Masts’ transitional equipment phase. Whether out of a desire for greater transparency, as a response to retailer demands, or a belated effort to comply with FDA requirements, the Masts finally began including ingredient lists on their chocolate bars. During this period, the ingredient lists included cocoa butter, vanilla, and soy lecithin (i.e., CBVL), in addition to cacao and sugar. The product line did not change significantly in the transition from the black box to CBVL phase (apart from elimination of the “Wythe and Berry” white chocolate bar), nor did perceptions of quality from keen observers (particularly the chocolate’s suspiciously smooth texture), leading many to believe that the basic ingredients revealed in the new lists had been in use all along.

Though there’s nothing objectionable about the judicious use of cocoa butter, vanilla, or lecithin in fine chocolate, the Masts’ ingredient lists during the CBVL phase were closer to those of mid-grade industrial manufacturers than to the simpler formulations of American craft chocolate makers at the time. These ingredient lists are also impossible to reconcile with the Masts’ claims of having been two-ingredient chocolate makers from the beginning—indeed, of having pioneered two-ingredient chocolate. 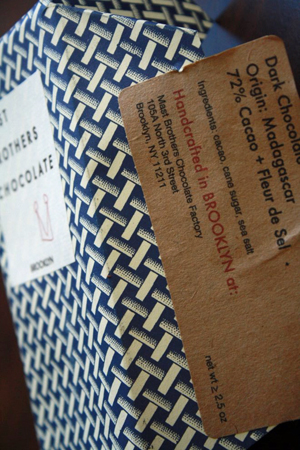 The bars with unspecified cacao origins also vanished. Replacing them were two-ingredient single-origin bars with cacao from the Dominican Republic and, towards the end of 2009, mostly Madagascar. (The flavored bars were then built on the slim range of underlying base chocolates.) When the Masts released their “Brooklyn Blend” over a year later, they presented it as their first non-single-origin bar. (Bar wrapper: “We have brought all of our favorite beans from around the world to create our first house blend.”) The Masts’ two-ingredient phase coincided with the arrival of the CocoaTown ECGC-65 melangeurs and the observable changes in the characteristics and quality of the chocolate they sold.

The Masts’ selective amnesia about their early product lines—the industrial formulation, milk chocolate, white chocolate, and generic blends—demonstrates a will to build myth upon myth for compliant media, unmoored from the constraints of their actual history. The secrecy and the abrupt ingredient shift—combined with the limitations of their equipment and perceptions of informed tasters—are consistent with a company that remelted commercial couverture for nearly two years, before transitioning to legitimate bean-to-bar production.

[Go to Part 1, Part 2, or Part 4. Supplemental matter will appear on the DallasFoodOrg Tumblr.]