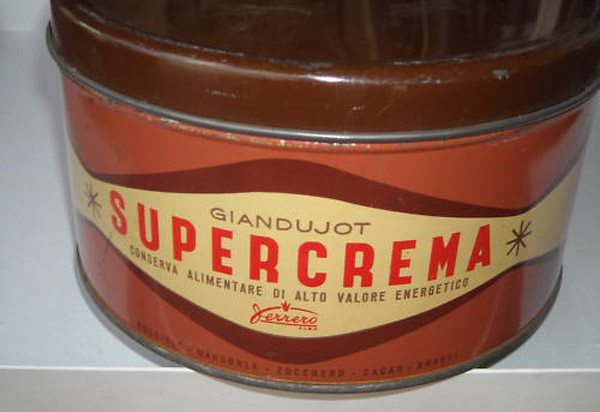 Fate dealt Ferrero two blows with the flood of 1948 and, six months later, the death of its founder.  The following year, the company reorganized under the direction of Ferrero’s widow Piera, his younger brother Giovanni, and his twenty-five-year-old son Michele (1).

Giovanni, who apprenticed as a baker in Dogliani along with Pietro in the early 1920s, had rejoined his brother in Alba where he was tasked with sales and marketing.   Before his father’s death, Michele Ferrero had completed a degree in accounting at Mondovì and returned to learn the family business.  As sales continued to increase through the 1950s, Piera, Giovanni, and Michele shared management responsibility, though Piera primarily handled administrative and personnel matters, Giovanni continued to oversee sales and marketing, and Michele managed production (2). 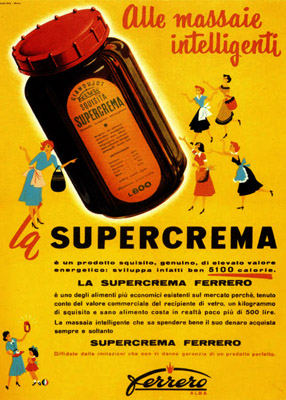 Michele Ferrero also shepherded the development of new products after his father’s death, most notably Mon Chéri (which fueled Ferrero’s early success in Germany and remains in production today) and Supercrema Giandujot (or simply Supercrema).  Supercrema, which Michele and Giovanni launched in 1949 (i.e., the year Pietro Ferrero died), represented a significant evolution of Ferrero’s Giandujot, reformulating it to be spreadable.  Ferrero distributed Supercrema in glasses, consumer-sized cans, and wholesale cans for grocers and shopkeepers who turned product into service by applying a schmear of the paste on customers’ bread (3).

Like Giandujot, Supercrema proved to be tremendously successful.  From 1947 to 1951, Ferrero’s factory in Alba had grown from 100 employees to 300.  Ten years later, in 1961, Ferrero employed 2,730 employees in its Alba factory, in addition to those working in Ferrero factories in Pozzuolo Martesana (Milan), Lauro (Avellino), and Germany (4). 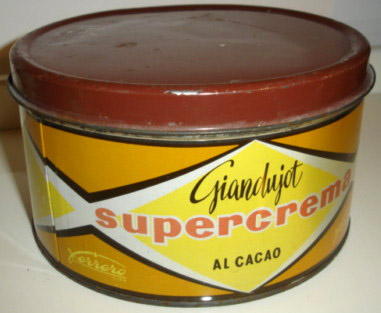 Michele Ferrero spearheaded the German factory.  With reluctant acquiescence of Michele’s mother and uncle, the company took over some abandoned Nazi warehouses in Stadtallendorf in 1956.  The factory opened the following year, establishing a lasting foothold in the German market and paving the way for Ferrero’s success throughout Europe.  Shortly after the German factory opened, Giovanni Ferrero died at the age of fifty-two, leaving Michele Ferrero in complete control of the company (5). 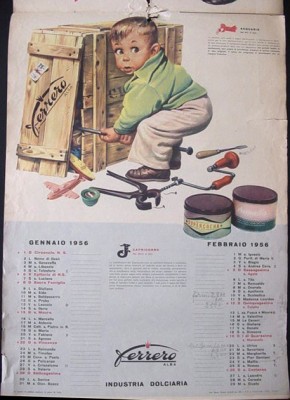 Ferrero developed the Supercrema brand nearly a decade before its early efforts to sell elsewhere in Europe.  The limits of the brand name grew more apparent as the company ventured into Germany, France, Belgium, and England.   To better appeal to the French market, Ferrero marketed Supercrema under the name “Tartinoise,” a portmanteau of tartiner (to spread) and noisette (hazelnut).  Further brand fragmentation might have occurred, were it not for new Italian marketing regulations in 1963 that limited the use of superlatives in labeling (7).  The need to eliminate “super” from the product name prompted Michele Ferrero to initiate a broader reformation of the brand to better fit the company’s increasingly international footprint. 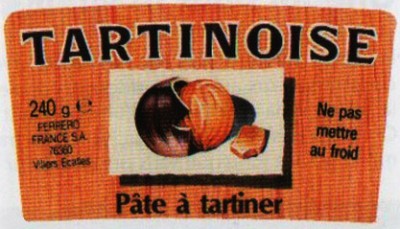 With Ferrero already well established in Italy, Michele sought a name that would emphasize the hazelnut content of the spread to consumers in England and Germany.  Many candidates for the renaming riffed off of the English “nut” and German “nuss”: Nutsy, Nussina, Nusscrem, Nutina.  Eventually, Michele and Piera settled on Nutella (8).  Michele hired Carmelo Cremonesi and Gian Rossetti of Milan’s Studio Stile to design logos, labels, and packaging.  Studio Stile worked closely with Michelle in designing a black and red lowercase logo and illustration of a knife and slice of bread that have undergone only minor changes in the past four and a half decades.  On Monday, April 20, 1964, Nutella hit the market (9).

3.  Subbrero, 159.  Supercrema did not immediately replace the established Giandujot products, which continued in production into the 1950s.  Like Giandujot, Supercrema contained almonds as well as hazelnuts.

8.  Padovani, 20-1.  Nutella was envisioned as part of a trio of products, including Cerasella (a spin-off of Mon Chéri) and Naturella (a hard caramel).