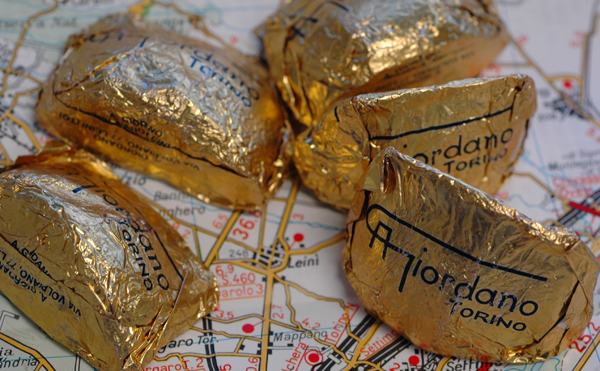 Gianduiotti can be found in nearly every chocolate shop, pastry shop, and café in Piedmont.  Many of these gianduiotti comply with a majority of the rules, including respectable hazelnut content using Tonda Gentile delle Langhe.  While the average quality is good, the discriminating consumer should not be complacent.

Many shops do not produce in-house, but rely on private-label manufacturers (such as Turin’s Prodotti Gianduja) to provide finished molded gianduiotti, wrapped in colorful paper customized with the shop’s name or logo.  Private-label gianduiotti may be of acceptable quality (especially compared with some of what we see in the United States), but can’t hold a candle to the best artisanal gianduiotti.  The easiest way to filter these out is to stick to the rules, paying particular attention to Rule #2 (i.e., hand-cut over extruded over molded).  That may be slightly unjust, since some shops do make good hand-molded gianduiotti in-house.  However, on average, hand-cut and extruded gianduiotti in Piedmont are noticeably better than molded gianduiotti (1).

With that said, here are four picks for the “best of the best” gianduiotti in Piedmont, beginning with the two hand-cut holdouts (2). 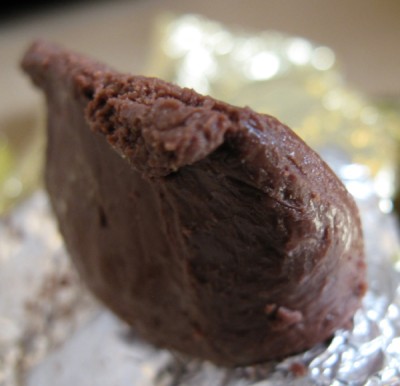 First is Gerla.  Francesco Ciocatto’s shop, on Turin’s Corso Vittorio Emanuele, comes up in any serious conversation about the best gianduiotti.  Though Gerla offers less-costly molded gianduiotti (including five-gram minis), the traditional hand-cut, hand-wrapped gianduiotti are the real draw.   These score on almost all of the ten rules (3).

The shape of these, the most traditional of gianduiotti, doesn’t perfectly follow the canonical form of a neatly symmetrical overturned boat.  The bottom is flat, from being deposited on cool marble, and there is a sharp, rising keel above.  While there’s a curving bulge on one long side, the opposite is flat from the cut of the knife.  The general look remains the same from piece to piece, but without the mechanical regularity seen in molded and even in most extruded gianduiotti.  On average heavier than the ten-gram standard, the weight varies also, ranging from thirteen to fifteen grams each. 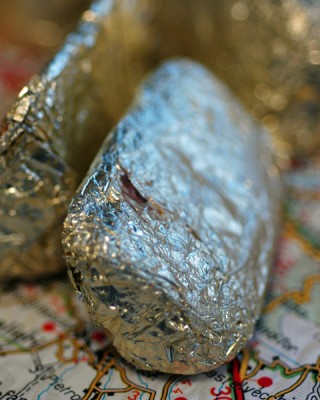 Gerla’s gianduiotti release the distinct perfume of Tonda Gentile delle Langhe even when wrapped.  The unprinted gold foil clings tightly.  Even at a room temperature of 70 degrees Fahrenheit (21 degrees Celsius), unwrapped pieces can’t be handled without leaving residue on the fingers.  The gianduia yields with a gentle squeeze, demonstrating the softness (morbidezza) characteristic of traditional gianduiotti.  This “barely solid” quality results from an exceptionally high hazelnut content of 40% (4).

When swirled through the mouth, the mass quickly spreads into a thick, velvety mouth-coating.  The balance of flavor leans heavily towards the sweetness of hazelnuts.  Though a dark chocolate gianduiotto, there’s no perceived bitterness or astringency.  This is faultless gianduia. 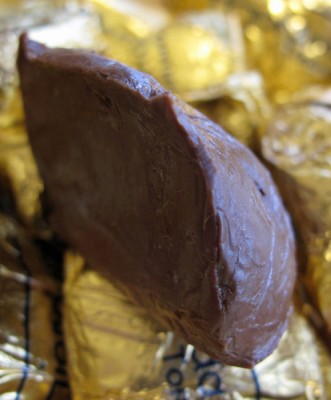 Next is A. Giordano.  Originally opened in Turin in the late nineteenth century, A. Giordano relocated to Leinì in the late 1960s under its new owners, the Faletti family, who continue to own and operate the company today.  In addition to the shop in Leinì, Giordano maintains a retail storefront in Turin’s Piazza Carlo Felice.  As with Gerla, Giordano sells molded gianduiotti for the budget conscious, though the cognoscenti seek the hand-cut.  The hand-cut pieces comply with all but one of the rules (5).

Though with some irregularity, Giordano’s gianduiotti share the typical hand-cut shape, with a sharp, curved top edge, a flat bottom, and a flat cut side with a bulge opposite.  The average weight of pieces approaches the ten-gram standard, ranging from eight to twelve grams.  Gold foil wrappers feature the company’s logo and, across the bottom, the address of their shop in Leinì. 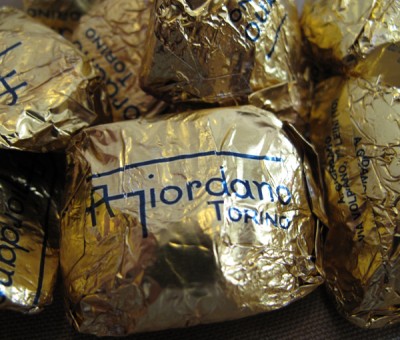 Giordano’s gianduiotti also push the upper limit for hazelnut content, with 40%, all Tonda Gentile delle Langhe (6).  The high hazelnut content and sugar make these fairly sweet, with chocolate right behind, and a noticeable vanilla aroma.  Another faithful interpretation of the Turinese specialty.

A related house specialty of A. Giordano are Giacomette, named after Gianduia’s wife.  Each Giacometta is hand-formed from the same gianduia used for Giordano’s hand-cut gianduiotti, but with the inclusion of finely chopped roasted hazelnut bits for textural contrast.  The pieces, which look somewhat like dried figs, are also hand-wrapped in foil. 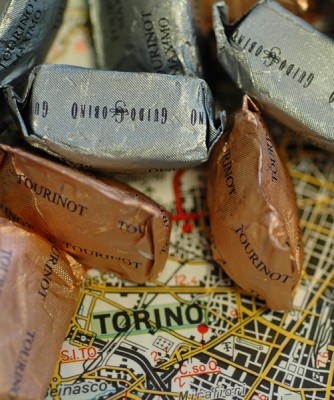 Now we come to Guido Gobino.  Over the past decade, Gobino has won more international attention than any other Turinese chocolatier.  This success owes as much to Guido Gobino’s brilliance in design as it does to the quality of his products.  While Gobino’s international recognition arises primarily from his dark chocolate bars (which have received mixed reviews from serious chocolate consumers), within Piedmont he is known first and foremost as a master of gianduia. 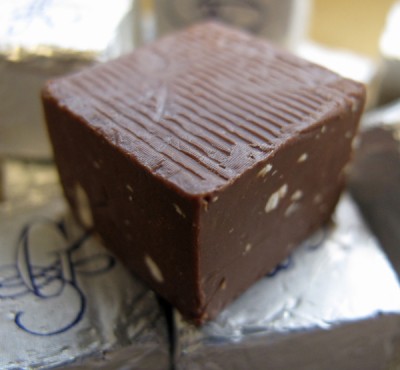 If a visitor to one of Gobino’s two Turin shops were to buy one of every product containing nocciole, he would need a duffel bag to get it all home.  Beyond the obvious gianduiotti, there are gianduia bars, fogli nocciolato (one-kilo slabs of hazelnut bark, in dark, milk, or white chocolate), giandujone with 40% TGL (cut by hand and sold by weight), chocolate-covered whole hazelnuts, ganaches, gianduia spreads, a variety of cremini (including the olive oil, sea salt, and gianduia version that won a well-deserved gold medal at the 2008 Academy of Chocolate awards), and his latest innovation that he calls Hazelshock (an intense gianduia in powder form, intended to be sucked up through a straw).  All of Gobino’s hazelnut products use Tonda Gentile delle Langhe and even include the harvest year on the ingredient list.  (As further evidence of his hazelnut-geekiness, Gobino is the only Piedmontese chocolatier I’ve seen who makes efforts to use the new industry-designated name for the cultivar, Tonda Gentile Trilobata.) 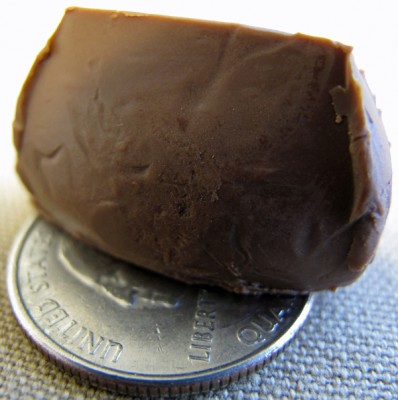 Gobino’s gianduiotti follow all but one of the rules (i.e., an inexplicable failure to specify hazelnut percentage on the ingredient lists).  All are formed by extrusion.  Though his standard ten-gram milk chocolate gianduiotto classico is excellent, Gobino is best known for the gianduiottini Tourinot—diminutive (but chubby) five-gram extruded pieces that he first released fifteen years ago.  With the original milk chocolate Tourinot and the dark chocolate Tourinot Maximo, Gobino’s genius lies in the tasteful balance of ingredients.  Though the perfume of toasted hazelnuts emerges as soon as the wrapper is peeled back, hazelnuts don’t dominate the flavor profile as the gianduiotto melts on the tongue.  In fact, nothing dominates; the ingredients meld in perfect harmony.  Hazelnut content is held to roughly a third (30% in the milk chocolate and 33% in the dark chocolate gianduiotti), allowing the cacao to take the edge off the sweetness of sugar and nuts (7).  Highly recommended.

Several years ago, a motivated consumer could find a number of Gobino products on the US market, though today it’s rare to see anything other than scattered dark chocolate bars and jarred spreads (often at exorbitant markups).  Gobino gianduiotti have been available through the occasional mail order retailer (usually for a limited time) and at better Italian import shops (including Eataly in New York City).  The fact that there has been some, albeit inconsistent, US distribution offers hope that Gobino’s excellent gianduiotti may someday be more readily available here (8). 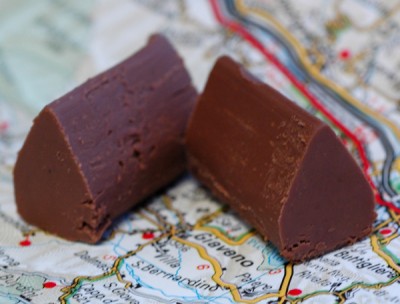 Lastly, there’s Guido Castagna.  Castagna’s workshop sits on a riverbank in Giaveno, a comune in the mouth of Val Sangone about twenty miles west of Turin. The small, utilitarian retail nook lacks the wood, marble, brass, and the lavish window displays of Turin’s chocolate shops and cafes.  Though in business for less than a decade, Guido Castagna has already won widespread attention in Italy both as a chocolatier and as one of Italy’s few micro-batch bean-to-bar chocolate makers.

Castagna’s gianduiotti follow all of the rules, but are unconventional in some respects.  Though they are extruded, the method is unique.  Since Enrico Carle’s invention of the first gianduiotto machine in the early twentieth century, mechanical extrusion of gianduiotti has mimicked the action of a pastry bag with a slotted nozzle, depositing the soft gianduia paste from above.  Castagna uses a pneumatic device to extrude gianduia paste through a die with greater compression, which (as with pasta) preserves a fixed cross-sectional profile. 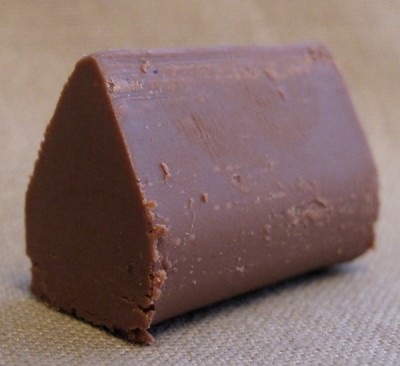 This novel extrusion method produces a teardrop profile that approximates the cross-section of traditional gianduiotti (though more rounded at the base), but with perfectly flat ends where the extruded gianduia paste has been cut.  The compression increases the density of the paste, allowing Castagna to raise the hazelnut content to 40% (whereas conventionally-extruded gianduiotti rarely exceed 30%). 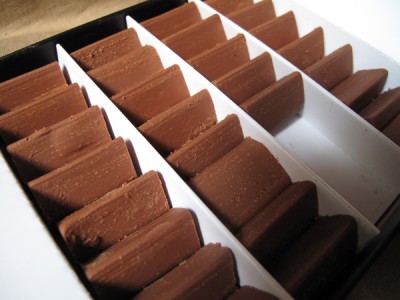 Castagna also departs from tradition by boxing his gianduiotti nakedly in neat rows, rather than individually wrapping them in colored foil.  Getting the first piece out of each row can be a challenge, since the thin edges facing up melt quickly when grasped between fingers and thumb, becoming slippery. 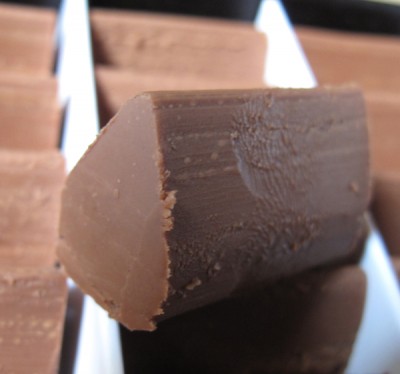 But that highlights the strength of Castagna’s gianduiotti.  The hazelnut content pushes the upper limit, but the pieces are lower in sugar than the hand-cut gianduiotti of Gerla and Giordano.  Though sweet, the sweetness is primarily of Tonda Gentile delle Langhe.  The sugar is balanced by Venezuelan cacao mass of Castagna’s own production.  (If the cacao is from Chuao, as the ingredient labels and press reports indicate, the prized qualities of the origin are largely obscured by having to stand third in line behind hazelnuts and sugar.)   Apart from the addition of some cocoa butter to lower viscosity of the cacao mass in processing, there are no other ingredients—no milk solids, no vanilla, and no lecithin.

The result is impressive.  Castagna achieves an incredibly smooth texture, but without the slickness of excessive cocoa butter.  The high hazelnut content ensures a rapid melt on the tongue.  These are the smoothest, fastest melting, most intensely hazelnutty gianduiotti I’ve had.  Highly recommended (9).

1.  That distinction holds at the top of each category, also.  The best hand-cut and extruded gianduiotti are noticeably better than the best molded gianduiotti.

2.  It feels awkward to cut this list off at four makers, rather than five, ten, or twenty.  Yet, as much as I may like some of the “also rans,” the quality gap is wide enough that I can’t recommend them, when the very best are no harder to obtain.

3.  The lone exception is the absence of an expiration date, though that’s not really problematic since Gerla’s hand-cut gianduiotti are only available in their shop, where they can ensure freshness and quality first-hand.

5.  As with Gerla, the one exception is the omission of an expiration date.  Since the hand-cut gianduiotti are not available outside Giordano’s two shops, this is not problematic. 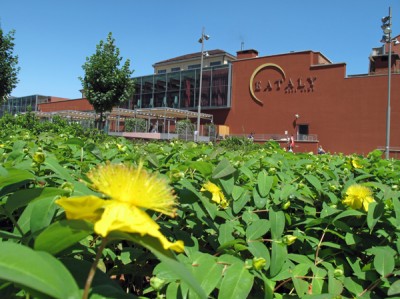 8.  Of the gianduiotti described in this item, Gobino’s are the easiest to find in Turin.  They are, of course, available in Gobino’s factory store (on Via Cagliari) and boutique (on Via Lagrange).  They can also be found at Eataly (Turin) and gift shops at the Turin Airport.

9.  With the opening of a retail storefront in Turin earlier this year, Castagna’s gianduiotti are now available without a trip to Giaveno.  Though Eataly stores in Turin and Pinerolo carry Castagna’s excellent gianduia spreads, they have not carried his gianduiotti.  (To date, I have seen no Castagna products at all in the US.)