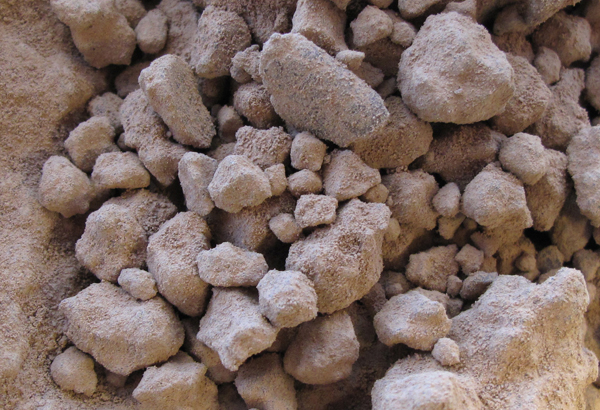 Cacao liquor—also known as cacao mass or paste—is produced by grinding cacao seeds, after they have been fermented, dried, roasted, and winnowed to separate the cacao nibs from the hulls.  The term “liquor” can be misleading, since the substance is quite solid at room temperature (as can be seen with the DeVries Costa Rican liquor pictured above).  However, heat during processing pushes the temperature of cocoa butter above its melting point (typically between 80.6 and 91.4 °F), resulting in a viscous liquid (1).

The Italian prea, like its close predecessor the Aztec metate, generated the necessary heat by the combination of friction and a fire beneath the grinding surface.  Early mills and mélangeurs—and probably the device invented by Bianchini—relied on friction alone.  (The video above shows an early twentieth century, German-made, friction-only mélangeur currently in use by Amano Artisan Chocolate in Orem, Utah.)  Subsequent advances incorporated steam or electrical heating of the lower grinding surface to improve fluidity of the cacao liquor during grinding and mixing.  However, the first evidence of the use of steam in Turin’s chocolate industry—in the factories of Talmone and the recently merged Caffarel, Prochet & Co.—came in the late 1870s, after the invention of gianduia (2).

Mechanizing roasting, winnowing, and grinding, as Turin’s proto-industrial chocolate makers did by the 1860s, reduced labor and increased production capacity.  However, several transformative technologies of the century had yet to arrive on the scene. 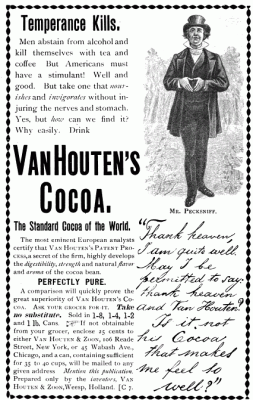 The first of these was the proliferation of the cocoa press.  In 1828, Coenraad van Houten, of the Netherlands, developed a press that could mechanically extract a significant amount of the cocoa butter from cacao mass.  Van Houten’s invention proved to be ahead of its time, arriving during a worldwide slump in the chocolate market and producing cacao byproducts (i.e., press cake and cocoa butter) that, at the time, had no obvious commercial use (3).

It was in the 1860s—concurrently with the birth of gianduia—that Van Houten’s device finally became marketable.  The press only found its purpose after another invention by Van Houten—a process of alkalization intended to mellow cacao’s flavor and improve its miscibility in powder form (after the grinding of press cake), resulting in a superior drinking chocolate (4).  Production of cocoa powder became a specialty of the Netherlands, which exported heavily to England and Germany.  Alkalization came to be known as “Dutch process” and its product “Dutched chocolate” (5).  Surplus cocoa butter from pressing could then be added to cacao mass or cocoa powder, following Fry’s mid-century experiments in England, to make solid, moldable chocolate.

Though the English were early adopters of the Van Houten press—with Cadbury’s acquiring one in 1866 and Fry’s in 1868—the device played no role in the chocolate industry of Turin until much later (6).  Two observations flow from that fact.  First, early gianduia was made with cacao liquor, rather than with cocoa powder and cocoa butter (as became standard practice for most industrial makers of solid chocolate) (7).  Second, early gianduia was not made with Dutched chocolate (even though it eventually became common in Italy). 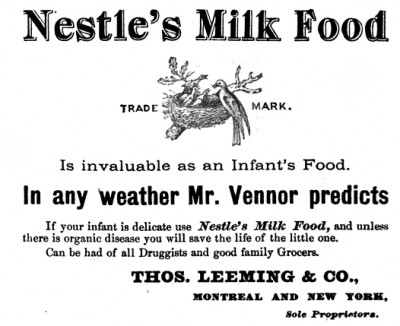 The next transformative technology that had not—indeed, could not have—arrived in 1860s Turin originated in Switzerland.  In 1867, a German-born chemist in Vevey, Switzerland, developed a process for making condensed and powdered milk by evaporation.  Though the chemist, Henri Nestlé, would become well-known for chocolate in the twentieth century, his work with milk paved the way for the experiments of Daniel Peter, a former candle-maker turned chocolate-maker, who also lived in Vevey (8). 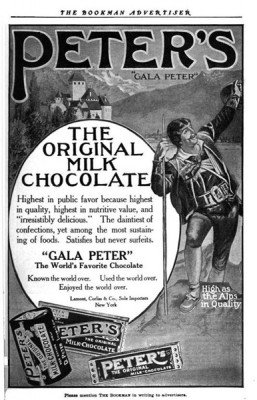 Peter spent sixteen years trying to solve the problem of how to create a stable, solid mixture of cacao mass with milk.  More plainly, he was trying to make milk chocolate.  The high fat content of cacao mass (roughly 50%, in the form of cocoa butter) and the high water content of milk (just shy of 90%) made this a difficult goal.  Peter’s eventual solution relied on Nestlé’s innovations in condensing milk, allowing the water content to be reduced significantly.  After years of trial and error, Daniel Peter released the world’s first milk chocolate bar in 1879 (9). 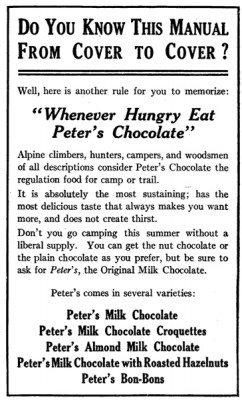 Gala Peter ad in The Official Handbook for Boys (Boy Scouts of America, 1911).

Following Peter’s invention, Swiss dominance of milk chocolate production continued for over two decades.  Cadbury’s was unable to release its own milk chocolate until 1905 (10), while Milton Hershey was still trying to ramp up commercial production of his five-cent milk chocolate bar in the Pennsylvania factory town that would soon bear his name (11).

Thus, though it may surprise some American consumers who only know gianduia in milk chocolate forms, the earliest gianduia contained no dairy and would not for decades (12). 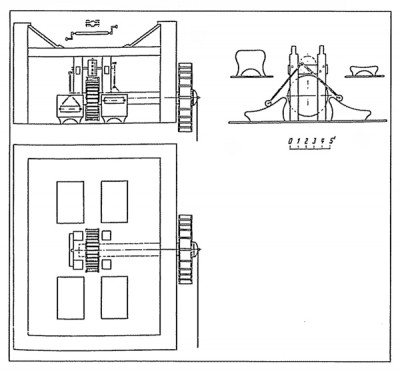 Yet another Swiss advancement post-dated the invention of gianduia, but depended on a much older Italian invention.  In the early nineteenth century, a Genovese chocolate-maker named Bozelli invented his own machine for grinding cacao.  Unlike the Spanish mills and French mélangeurs, with their constant, unidirectional turning, Bozelli’s machine essentially replicated the physical motion of grinding cacao by hand on a metate or prea—repetitive, longitudinal, back-and-forth grinding by mechanical arms over a concave surface. 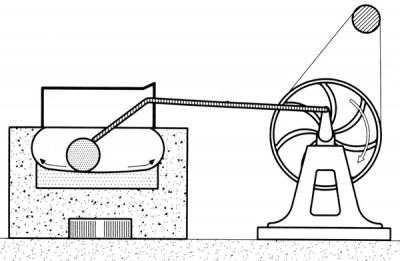 Whether because of its complexity or inefficiency, Bozelli’s machine was not widely adopted.  One of Bozelli’s machines fell into the hands of a Bern paper mill owner named Ballif.  Though Ballif and his apprentice Alfred Walthard left no lasting impression on the world of chocolate, in 1879 they sold their equipment, including Bozelli’s machine, to someone who would: Rudolph Lindt (13).

The roaster Lindt purchased was defective, resulting in cacao liquor with high moisture content.  In early experiments to work around this problem, Lindt added extra cocoa butter and left the cacao liquor to slosh back and forth in Bozelli’s machine, which—being powered by water—could be left in operation continuously at no additional expense.  Lindt discovered that prolonged working of the liquor in Bozelli’s machine resulted in a smoother texture, milder flavor, and a pleasant, melting mouthfeel (enhanced by the added cocoa butter) (14).  Lindt’s process—conchage (i.e., conching)—produced what came to be called fondant chocolate, a substantial improvement over previous “eating chocolates” (15).

Though Lindt’s techniques remained a well-protected trade secret for nearly two decades, imitations of Bozelli’s machine and improved conches began appearing at the turn of the century from manufacturers in Switzerland, Germany, France, and England.  Conching quickly became nearly universal in industrial chocolate making (16).  But it did not exist at the time gianduia first emerged.

To sum up, given the technologies available at the time and place of its first appearance, we know that gianduia (i) was made with cacao liquor, rather than cocoa powder, (ii) did not make use of alkalization (i.e., Dutching), (iii) did not contain milk, and (iv) was not conched.  It predated most of the consequential post-Conquest advances in chocolate processing.

4.  Advertisements and scientific writings through the late nineteenth century reveal persistent concerns about the “digestibility” of chocolate, a problem believed to be addressed by removal of cocoa butter.  Of a cocoa powder from L.A. Loewenthal & Co., the analytical records of The Lancet on February 19, 1870, relate that “it really consists of cocoa from which the greater part of the butter has been removed, and hence it is less rich, lighter, and more digestible than many of the preparations of cocoa ordinarily met with” (271-2).  See also, The Medical Herald: A Practical Monthly Journal of the Medical Sciences.  Vol. 10, No. 10.  1891.  P. 504.)  Today, alkalization’s impact on miscibility is less certain than its effects on cocoa color, pH, and flavor; however, the widespread nineteenth century belief that it made cocoa more “soluble” sufficed to move the market.  Beckett, Stephen T. (editor).  Industrial Chocolate Manufacture and Use.  Wiley-Blackwell.  2009.  Pp. 132-3.  See also, Beckett, Stephen T.  The Science of Chocolate.  RSC Publishing.  2009.  Pp. 54-5.

8.  Chiapparino, Francesco.  “Milk and Fondant Chocolate and the Emergence of the Swiss Chocolate Industry at the Turn of the Twentieth Century,” in Food and Material Culture: Proceedings of the Fourth Symposium of the International Commission for Research into European Food History (ed. Martin Schärer and Alexander Fenton).  Tuckwell Press.  1998.  P. 334.

15.  It was originally believed that Lindt’s liberality with cocoa butter was key to the quality of chocolat fondant.  By the early twentieth century, makers were already recognizing that the improvements in flavor and texture derived more from the mechanical process of conching than from copious amounts of cocoa butter.  (Spagnoli, Mario.  Fabbricazione del Cioccolato.  Ulrico Hoepli.  Milan.  1926.  P.  53.)