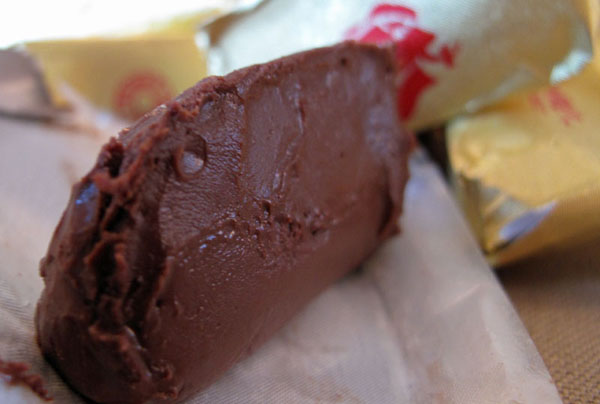 Before diving in, a brief discussion of terminology may help some get their bearings. 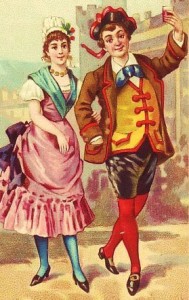 The proper noun, Gianduia, refers to a nineteenth century character (originally a puppet) that came to symbolize the people of Piedmont and Turin.

The lower-case noun, gianduia, is a simplification of the nineteenth century term “chocolate of Gianduia” (cioccolato di Gianduia), taking its name from the character Gianduia.  In this sense, gianduia refers to a smooth paste made with hazelnuts, sugar, and cacao liquor (aka cacao mass). 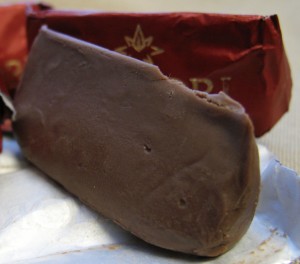 Gianduiotti from Domori (None) 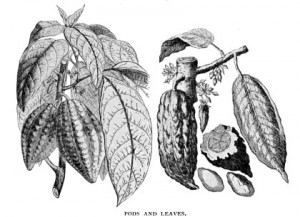 Cacao pods and seeds (or "beans")

Since this is a story about chocolate, familiarity with the following terms will be assumed: cacao/cocoa (the fruit containing the seeds or “beans” used to make chocolate; also the tree producing that fruit, Theobroma cacao), cacao nibs (pieces of cacao beans minus the shell), cacao mass/liquor (ground or milled cacao nibs), cocoa butter (the fat naturally occurring in cacao beans, mass, and nibs), and cocoa powder (powder produced by removing a portion of the cocoa butter from cacao mass, then grinding the remaining solids).  (For useful background, consider picking up the Coes’ The True History of Chocolate, Mort Rosenblum’s Chocolate: A Bittersweet Saga of Dark and Light, or Clay Gordon’s Discover Chocolate.  For those tuning in from Italy, grab a copy of Gigi and Clara Padovani’s Conoscere il Cioccolato.) 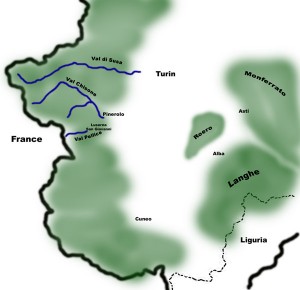 Geography will come into play at times.  Piedmont is a land-locked region in the northwest of Italy, sharing borders with France and Switzerland.  Turin, the capital city of Piedmont, sits in the plains along the river Po.  The Cottian Alps run along the French-Italian border and, on the Italian side (west and southwest of Turin), form several key valleys, including Val Pellice, Val Chisone, Val Germanasca, and Val di Susa.  The Langhe consists of a range of steep hills beginning about 35 miles southeast of Turin.

Why focus on gianduia?  Well, beyond its intrinsic culinary merit, it has an interesting history that remains largely unknown to chocophiles outside of Italy.  Most English-language accounts of gianduia consist of just-so stories rehashed from modern travel writers and print journalists—poorly sourced (if sourced at all) and often conflicting with historical facts and probabilities.   (Though not primarily historical in nature, Corby Kummer’s occasional comments on gianduia in The Atlantic and New York Times stand out from the pack.)

Unfortunately, most Italian writing on the subject is little better.  Apart from the work of Mario Marsero, Christian Bächstädt-Malan, and (for a popular audience) Gigi and Clara Padovani, most treatments suffer from a want of historical rigor.  Demonstrable errors abound and unsubstantiated legends conveniently fill awkward gaps in the historic record.

The historical goals here are threefold: first, to identify what we do know about the history of gianduia; second, to identify elements of gianduia’s common etiological myths that lack solid grounding; and, third, to identify gaps in the historical record and (in the absence of better information) to offer reasoned hypotheses.  Sources will be referenced in footnotes.  Primary sources will be used, where available, as well as secondary sources (though not uncritically).  If there are errors, I welcome correction.  If there are useful sources I’ve overlooked, I want to hear about them.  (For corrections, advice, or other feedback, click on the “Contact” tab at the top of the page.)

The historical portion of this series is not an end in itself.  Understanding what gianduia is and when, where, and how it developed increases our appreciation and judgment.  An informed mind stands behind a sound palate.  At the end of the road, readers will have the tools they need to wisely select and appreciate gianduia.  (For those who would rather just be told, I will also offer some specific recommendations.)

We’re going to be on the gianduia beat for some time.  Those who wish to follow the weekly series can subscribe to the RSS feed.  An extreme abridgment of each item will be subsequently sent via Twitter, for those who would prefer the Cliff’s Notes version.  Additionally, non-Anglophones may use the “[Translate]” widget at the bottom of each item to generate a deeply flawed translation to the language of their choice.