Though we’ve been discussing the earliest gianduiotti, the late-nineteenth and twentieth centuries brought a number of innovations in production, not all of them bad. 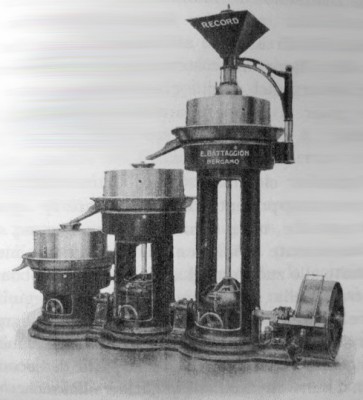 Gradual improvements in industrial chocolate-making equipment (mélangeurs, hammer mills, refiners) enabled makers to produce gianduia with a finer, more uniform particle size, making it smoother and silkier on the tongue.  By 1904, Lindt’s conche was no longer a trade secret, and equipment manufacturers in Switzerland, Germany, England, and France were marketing a variety of conches to makers (1).  This allowed further improvement to both texture and flavor.

The rise of mechanical formation (rather than hand-cutting) of gianduiotti in the early twentieth century is not well documented, though it appears to have begun with the invention of a motorized extruder by Enrico Carle, whose company, Carle & Montanari, eventually became a major manufacturer of industrial chocolate equipment (2).  Mechanical extrusion became more common among Turin’s larger chocolate makers following the First World War (3).

Mechanical molding (as opposed to extrusion) also became more common following the First World War (4).  This reflected a move towards more “modern” methods, including conching and the use of additional cocoa butter to create a smooth texture, crisp temper, and melting quality in the mouth (5).  In 1926, Mario Spagnoli, Technical Director for the industrial maker Perugina, offers a recipe for gianduia in which over 40% of total cacao solids are in the form of added cocoa butter (6)!  Liberal additions of cocoa butter skewed the fat content away from the traditional balance, resulting in a product that—due to higher saturated fat content—remained crisp and firm at room temperature.  It could be molded. 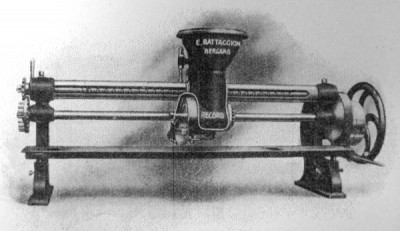 From its earliest use, connoisseurs have regarded molding of gianduiotti as improper, if not criminal.  In its 1929 submission to the Guida Gastronomica d’Italia, the National Fascist Federation of Confectionery Industry, after praising the original method of hand-cutting gianduiotti, stated that “All [gianduiotti] that are obtained with molding machines, molds, or matrices, are nothing more than imperfect imitations of the created form” (7).  Despite the preferences of buongustai, molding benefitted producers in several ways.  The technique was less labor intensive than hand-cutting.  The higher cocoa butter content made for a less temperature-sensitive and more shelf-stable product.  Above all, molding guaranteed uniformity of size and shape.  This uniformity, as Spagnoli observed in 1926, enabled producers to further reduce costs by replacing hand-wrapping with mechanical wrapping devices (8). 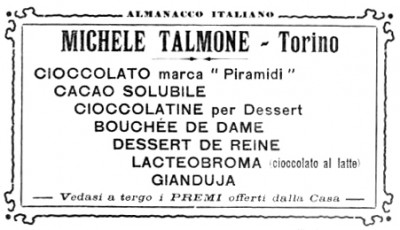 Perhaps the most significant twentieth century development of gianduia was the emergence of milk chocolate gianduia.  Yet the basic questions of when milk chocolate gianduia first appeared and from which company remain unanswered.  In 1903, Talmone appears to be the first Turinese chocolate maker to introduce a milk chocolate product, Lacteobroma (9).  The complexity of milk chocolate production could only be undertaken by a company of some size.  While Talmone was not large compared with contemporaries in the US and UK that were struggling to produce milk chocolate in the first decade of the twentieth century, it was the largest chocolate maker in Italy at the time, rivaled only by Moriondo & Gariglio.  Further, Michele Talmone was acquired by the Swiss company Tobler in 1905, a time in which the Swiss remained the world’s dominant producers of milk chocolate (10).  This enabled the flow of capital, technology, and know-how from Bern to Turin, giving Talmone a tremendous leg up on the local competition.

While Talmone would have been capable of producing Turin’s first milk chocolate gianduia, there is no evidence, at present, to indicate that they did.  Did milk chocolate gianduia arise during the import disruptions of the First World War?  During the height of Mussolini’s autarky?  And did it even originate in Turin?  The Swiss were early adopters of gianduia, with Cailler exhibiting it at the 1873 World’s Fair in Vienna and Suchard advertising it as a specialty in US and German publications by the end of the nineteenth century (11).  Any of the large Swiss makers would have been capable of fashioning milk chocolate gianduia long before the Italians and, given the Swiss emphasis on milk chocolate, it would not be surprising if they had.

1.  Chiapparino, Francesco.  “Milk and Fondant Chocolate and the Emergence of the Swiss Chocolate Industry at the Turn of the Twentieth Century,” in Food and Material Culture: Proceedings of the Fourth Symposium of the International Commission for Research into European Food History (ed. Martin Schärer and Alexander Fenton).  Tuckwell Press.  1998.  P. 340.

6.  Spagnoli, 113.  This is all the more remarkable since, in the same volume, Spagnoli observes that the Swiss mistakenly attributed the power of conching to a heavy addition of cocoa butter, which he regarded as harmful to flavor (53).

7.  Il Dolce, No. 42, August 1929.  P. 196.  With the use of the expression forma creata, the uncompromising declaration carries a quasi-theological tone.