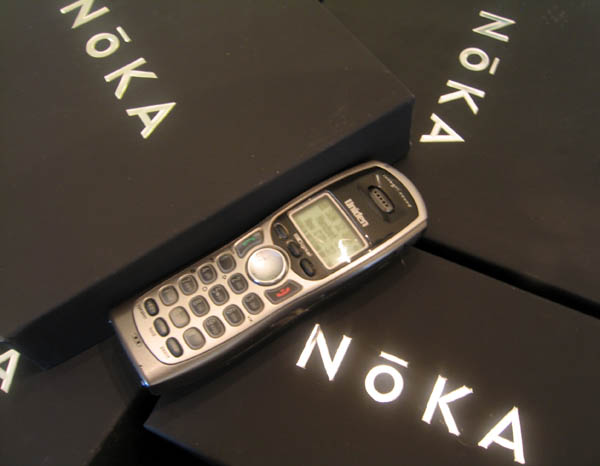 In Noka Part 5, we considered Noka’s chocolate in general terms. No more dancing around the edges. We need to get to the heart of the matter. Who supplies the couverture for Noka’s chocolates? Onward…

Identifying Noka’s couverture source shouldn’t be too hard, right? All we’d have to do is ask Katrina Merrem.

On September 14th, 2006, I emailed Noka, asking if they’d be willing to answer some questions for a DallasFood feature, mentioning that I’d like to run the complete, unedited Q&A sometime in early to mid-November. Katrina Merrem responded within 24 hours, stating that she “would be delighted” to share the Noka story. Later that day, I sent her a list of 20 questions. In the midst of many “general interest” questions (e.g., about her background, goals for the company, and feelings about chocolate, etc.) was one very specific query: “What maker(s) supply your couverture?”

I received no further reply.

I sent Katrina Merrem a follow-up e-mail on October 21 asking for an update. No reply.

I sent her a second follow-up e-mail on November 13. No reply.

A third follow-up e-mail on November 29. No reply.

At this point, I figured I was facing one of two possible scenarios: (a) Ms. Merrem was just too busy with preparations for the Christmas rush to bother with interviews (or, at least, an interview with a lowly local food blog); or (b) the direct question about the couverture had spooked her. Had she at least responded with some explanation or request for more time, I would have held off until she got the answers to me. (The idea was to have the Q&A be Part 1 of this series.) But after nearly three months of the silent treatment, I decided to push things along by other means.

On the morning of December 2, I called Noka. Katrina Merrem answered. I immediately recognized her voice from previous calls, visits to the store, and of course the radio interviews referenced in earlier reports. Without identifying myself, I played the unsophisticated customer and asked her to explain to me what Noka was all about. She gave me a nutshell description, with the expected patter about the purity and quality of their chocolate. Here’s where it went from there:

DF: So you guys make the chocolate?

KM: Uh-huh. We have a commercial kitchen here where we make the chocolates here.

DF: No, I mean, you actually make the chocolate, or are you using someone else’s chocolate?

KM: Well, we don’t do the whole “bean to bar.” We actually get it in a semi-processed state based on our specifications, but we do actually make the chocolates here.

DF: Who do you get your chocolate from then?

KM: We don’t disclose that.

KM: Because everything is based on our specifications, so it’s our, um, our chocolate.

DF: And you can’t say, though, who’s making it for you to your specifications.

DF: Okay. Well, that’s good enough for me. Thank you.

It’s a continuation of the same pattern of misdirection seen before. When asked if Noka makes the chocolate, she answered misleadingly in the affirmative. When cornered, she admitted that they don’t actually make chocolate. Then she promptly fell back on the same silly line she used on Martie Whittekin about the couverture being only “semi-processed.” As a further embellishment, she claimed that the chocolate is made to Noka’s specifications. (I believe this to be a flat-out lie, for reasons that will become apparent later.)

In the end, Katrina Merrem refused to reveal who supplies the couverture to Noka.

Was that unfair of me, putting her on the spot with such a blunt question? Hardly. As Doutre-Roussel has written, “A good chocolatier is proud of his work, and will not hesitate to share with you which couvertures he uses….”

So what about other chocolatiers? Are they evasive on this question?

They sure don’t appear to be. When I started gathering phone numbers from chocolatiers’ web sites to ask them the same question—just to see if they’d dodge, as Merrem had done—my efforts were repeatedly cut short, since many of their web sites openly identify their couvertures. The FAQ on Michael Recchiuti’s web page states that he uses E. Guittard, El Rey, and Scharffen Berger. The web site for La Maison du Chocolat states that they use Valrhona exclusively. The FAQ on the Vosges web site states that they use Valrhona, Felchlin, and Belcolade.

Most quality chocolatiers don’t play “hide the ball” on this question. When I visited Jacques Torres’s Brooklyn shop over the Thanksgiving weekend, I asked the girl that was making my hot chocolate whose couverture they used for their single-origin bars. Without hesitation, she replied, “We use Belcolade for everything.”

After being very impressed with the texture of the ganache in Gale Gand’s truffles at Tru some time back, I sent an e-mail to the restaurant’s general address asking if they could tell me what they used. In less than a day, I received a friendly e-mail from Gand telling me she used Callebaut for the ganache.

When I called Norman Love’s shop, the gentleman answering told me right away (Felchlin). I received answers just as readily from the first person that picked up the phone at Knipschildt’s order line (Valrhona, Belcolade, and Cluizel) and MarieBelle’s (Valrhona).

In a recent food trip to Portland, I had countless chocolates from several of the city’s excellent chocolatiers, including Sahagún, DePaula, and Alma. All were open about what they used, and it was all quality chocolate (e.g., El Rey, Valrhona, Vintage Plantations, Dagoba, Pralus, et al.). (Sahagún’s Elizabeth Montes even had some truffles made with DeVries chocolate—a name that only serious chocolate geeks will recognize and appreciate.)

Each of the more than twenty gourmet chocolatiers I called, e-mailed, or visited provided an answer to the question quickly and directly, without evasion or defensiveness.

Every last one of them…except Noka.

After encouraging sophisticated chocolate buyers to ask chocolatiers about their couverture, Doutre-Roussel went on to say that the frankness of a chocolatier’s answers to such questions “should give you an indicator of whether he is a businessman or an artist.”

I leave it to readers to draw their own conclusions from Noka’s response.