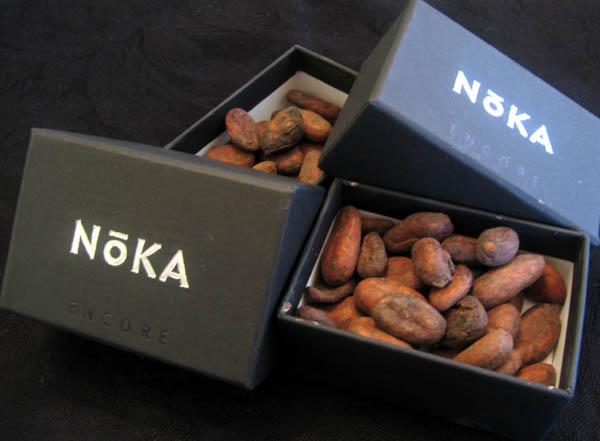 In Noka Part 2, we established that Noka’s chocolates are rather expensive. But that doesn’t resolve the question of whether the expense is justified. On to the analysis…

The first apologia I read for Noka’s pricing came in a Dallas Morning News article from February of 2005. Noah Houghton, Noka co-founder and Katrina Merrem’s partner, told the paper, “This is the very best chocolate you can buy—and you couldn’t buy the world’s best wine or the world’s best anything else for this price.”

At first blush, this seems like a flimsy defense, since the pricing of one category of goods is irrelevant to the pricing of another. (Is the “world’s best carrot cake” a bargain at any price, as long it’s lower than that of the world’s best wristwatch or sports car?) But the meat of the claim is that Noka’s chocolates are the best in the world.

But hold up a second. Note that Houghton did not say, “These are the very best chocolates you can buy.” He said, “This is the very best chocolate you can buy.” The emphasis is on the materials—not the workmanship. Noka’s founders have consistently touted the quality of the chocolate they use. But they also go beyond that, in many instances, by speaking of the chocolate in proprietary terms. They have, for example, given trademarked names to the four varieties: Bambarra, Tamborina, Vivienté, and Carmeñago. In the FAQ on Noka’s web page, they refer to “our single-origin chocolate.” They say that “there is no vanilla in any of our chocolate.”

Now for a brief but necessary digression. Not all consumers may recognize the distinction between a “chocolate maker” and a “chocolatier” (or “confectioner”).

A chocolate maker starts with cacao beans and transforms them into what we know as chocolate. There are many steps to the chocolate making process. Cacao pods are harvested and fermented, after which the beans are dried. The beans are shipped to a factory, where they are roasted, then cracked and winnowed, leaving cacao nibs. The nibs are milled to produce thick, pasty cacao liquor (or cacao mass). In fine chocolate operations, the cacao liquor is usually combined with additional ingredients (e.g., extra cocoa butter, sugar, milk solids, vanilla, and/or emulsifiers) and further milled to produce a smoother paste. (In industrial operations, the cacao liquor is pressed, causing a separation of liquids and solids—cocoa butter and cocoa presscake, which is then ground to make cocoa powder.) The paste is transferred to a device called a conche where it is refined (up to three days, for some makers) to obtain a silky smooth texture. The chocolate is then tempered to produce a proper crystalline structure (resulting in a glossy finish and crisp snap to the finished product) and molded (into bars, blocks, or individual pieces). 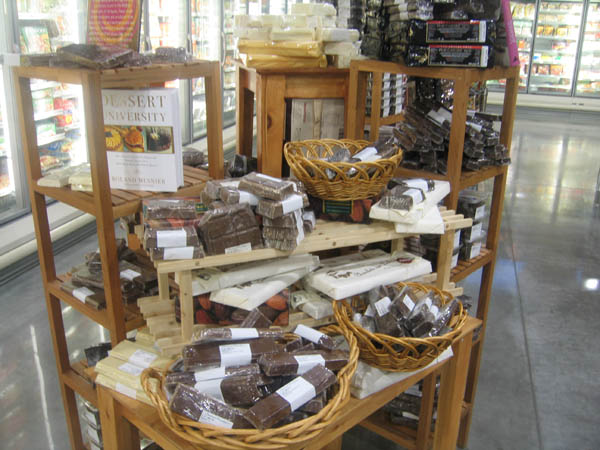 Chocolatiers, on the other hand, typically have no involvement in the actual making of chocolate. They purchase finished chocolate, usually in blocks or chips (aka couverture) such as those you may have seen on display locally at Whole Foods or Central Market (pictured above). The chocolate is then melted, molded, used for ganaches, for enrobing truffles, etc.

With that distinction made, let’s be clear about what Noka does. Noka is a chocolatier. They work with bulk chocolate purchased from a chocolate maker. They play no role in the transformation of cacao beans into chocolate.

This should be fairly obvious. But it’s not obvious—not from a perusal of Noka’s web site (with statements such as those cited above), not from Houghton’s and Merrem’s published statements, and not from the widespread misperceptions in press accounts about the company.

In February of 2005, Joyce Saenz Harris of the Dallas Morning News did a nice feature on Noka, which included an interview with Houghton and Merrem. Harris wrote that:

Noka takes the unusual step of using no lecithin (stabilizing emulsifiers, such as soy) in their chocolate.  …Katrina says Noka uses a minimum of 75 percent cacao in each single-origin batch. Most chocolatiers remove much of the natural cocoa butter from their cacaos, whereas Noka leaves it all in. And Katrina points out that Noka goes even further by using no vanilla in any of its products, making it a real rarity among even the most fastidious of chocolatiers.

Somehow Harris got the mistaken impression that Noka was making a chocolate with 75% cacao solids, no vanilla, and no soy lecithin, rather than buying blocks of chocolate with those qualities.

Did Merrem and Houghton mislead Harris? Did Harris just misunderstand what Merrem and Houghton were saying? There may be no way of knowing (unless Harris still has the tape of her interview). But what we do know is that Harris isn’t the only journalist to have gotten the wrong impression.

In the August 2005 Food & Wine, Emily Halpern wrote, “Former accountant Katrina Merrem makes chocolate with cacao beans from such countries as Ecuador and the Ivory Coast….” Again, there’s the misperception that Noka is obtaining cacao beans from around the world and making its chocolate.

On February 8, 2006, Christianna McCausland wrote in the Baltimore Sun that, “Dallas-based NoKa Chocolate creates single-origin bars and truffles using beans from Venezuela, Ecuador, Côte d’Ivoire and Trinidad.” But Noka has no involvement with beans. They don’t harvest them, ferment them, buy them, dry them, roast them, winnow them, or grind them.

From Millionaire.com: “Crafted naturally without any preservatives, additives, and artificial flavorings, NOKA Chocolate is made without emulsifiers such as soy lecithin, resulting in an immediate release of the intense cacao flavor on the palate, and without vanilla, to enable the true flavors of each origin to shine through.” Once again, Noka gets a maker’s credit for the qualities of the couverture they’re merely purchasing.

Daily Candy reported on August 5, 2005, that, “Partners Noah and Katrina (Get it? No-Ka?) scope premium plantations from Ecuador to Côte d’Ivoire to deliver the purest cacao flavors from around the world.” But Houghton and Merrem aren’t “scoping plantations” any more than you would be if you bought a two kilo block of Valrhona Manjari at Central Market.

From an interview with Jennifer Parigi on FitnessOneWeb.com:

Q: How are NOKA Chocolates made?

A: Our product is naturally crafted without preservatives, additives or artificial flavorings. We also omit soy lecithin and vanilla, resulting in an immediate release of the intense cacao flavor on the palate, and enables the true flavors of each origin to shine through.

Thus, when asked how the “chocolates” are made, Noka responds by talking about how the underlying chocolate is made, taking credit for it and suggesting, falsely, that they have a role in the process (e.g., “We also omit soy lecithin and vanilla”).

In a February 8, 2006, piece in Forbes, Susan Yara wrote: “Noka chocolate is a compilation of the finest dark chocolates, sourced from select plantations in Venezuela, Trinidad, Côte d’Ivoire and Ecuador…. Noka does not use any type of emulsifier, such as soy lecithin, in their chocolate-making process, nor do they add vanilla.” Indeed, they do not—principally, because Noka has nothing to do with “the chocolate-making process.”

In the March 10, 2006, “Dinheiro & Ócio” supplement to the Portuguese Diário Económico, Ana Felipa Amaro profiled Noka based on an interview with Noah Houghton. She wrote, “Based in Dallas, Noka sees cacao from all over the world entering its factories, harvested from exclusive plantations in Venezuela, Ecuador, Trinidad, and Ivory Coast in West Africa…. ‘Our prices reflect the quality of the cacao in the chocolate and the intense labor in its making,’ reveals Noah Houghton, president of the American brand.” Another journalist misled into believing that Noka sources and processes from the bean.

Juanny Romero, for the online Splash Magazines Worldwide, wrote of Noka, “They harvest their cacao from the most exotic places in the world.” Not true.

Even the company that provides the template and mailing software for Noka’s online newsletters (Got Corporation) said on its web site that, “Noka Chocolates sources the purest and rarest cocoa beans to achieve chocolate perfection.” Simply false.

To date, I’ve only found one pseudo-candid public acknowledgement from Noka’s founders that they’re chocolatiers, rather than chocolate makers. On October 5, 2005, Katrina Merrem appeared as a guest on the Martie Whittekin radio show, Healthy by Nature. The show began with a discussion with Dr. Carl Keen on the purported health benefits of chocolate. Ms. Whittekin brought on Merrem to close the show, introducing her as “an expert who actually makes chocolate.” Merrem didn’t correct Whittekin’s false statement that Noka makes chocolate. And through most of the interview, Merrem’s comments did nothing to contradict Whittekin’s misperception, but occasionally even reinforced it:

Merrem: Without any flavoring in our chocolate—which 99.9% of chocolate contains at a minimum vanilla or vanillin as a flavoring—so we don’t contain any flavoring at all, or any emulsifiers which are used to replace the natural cocoa butter that occurs in the cacao bean…. So we’re very, very at the end of the spectrum with having the quality and the simplicity of the ingredients, so you can actually taste what chocolate really tastes like.

Whittekin: And it does taste different from region to region where you source it.

It’s more of the misleading language we’ve seen before. “Our chocolate.” “We don’t contain any flavoring…or any emulsifiers.” No correction of Whittekin’s mistaken belief that Noka is sourcing beans for its chocolate. The interview keeps plugging along, until Whittekin—still thinking Merrem makes chocolate—throws what should be a softball:

Whittekin: Well, we’re about out of time here, but could you please tell us briefly, what is the process? How do you make this? We have one minute.

Merrem: Sure. Well, we import our couverture from Europe and then we work with it from there…um…to make the…

Whittekin: What was that word you started with?

Merrem: It’s a semi-processed form of chocolate. So we don’t do actual ‘bean to bar’….

Whittekin: But basically they kind of take it out of it’s shell and smoosh it?

Merrem: Exactly. They do that. And they process it. And we temper it down and make the four different origins of the chocolate.

I describe Merrem’s acknowledgement as “pseudo-candid” for two reasons. First, throughout most of the interview, she did nothing to disabuse Whittekin of the mistaken impression that Noka makes chocolate. She relied on the misleading language of the type that appears on Noka’s web site and that has steered so many journalists wrong, as seen above. It was only when Merrem was asked point blank how Noka makes the chocolate that she revealed that Noka doesn’t make chocolate. Second, even with that direct question, she continued to spin by describing couverture as “a semi-processed form of chocolate.” Couverture is not “a semi-processed form of chocolate.” It is chocolate, full stop. It is fully processed, tempered, and molded (usually into large bars, blocks, or chips).

Though they would have you believe otherwise, Noka does not make chocolate.