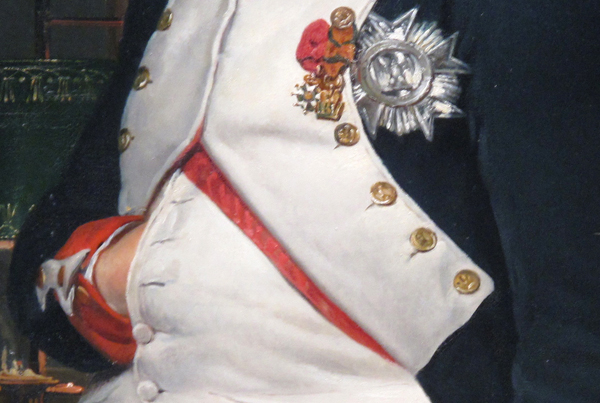 On November 21, 1806—barely a month after the crushing defeat of the Prussian army at Jena and Auerstedt—the 37-year-old Emperor of the French and King of Italy dictated orders from the palace of Berlin.  With the “Berlin Decree,” Napoleon instituted the Continental System, a trade policy that many have described as the genesis of gianduia.

In the Berlin Decree, Napoleon ordered a blockade of the British Islands, cessation of commerce and correspondence with England, imprisonment of English subjects in territory controlled by the French Empire or its allies, and seizure of property of captured English.  Napoleon intended to strike at England economically, by depriving the “nation of shopkeepers” of European markets for England’s manufactured goods and colonial commodities.

The immediate effects of the decree were limited.  The French navy remained crippled following the Battle of Trafalgar in 1805, precluding naval enforcement of the blockade.  Mahan describes this as “a time when the emperor could not keep a ship at sea, except as a fugitive from the omnipresent fleets of his enemy” (1).  Enforcement by land was undermined by widespread corruption, even among some of Napoleon’s family members and trusted subordinates (2). 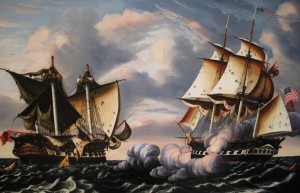 England quickly retaliated with a series of acts, culminating in the Orders in Council of November 11, 1807, declaring the French Empire and its allies in a state of blockade, extending the prohibitions to neutral shipping.  British naval supremacy made this more than a mere phantom blockade.  England’s imposition of constraints on neutral shipping heightened tensions with the United States, contributing to America’s passage of the Embargo Act of 1807.  Cascading countermeasures by France, England, and America extended the economic warfare, resulting in varying degrees of hardship for each, with France and its satellites bearing the worst of it.

With respect to cacao, William Gervase Clarence-Smith describes how “The tide of war penalized the French empire and its allies”:

The imposition of Napoleon’s Continental System in 1806 marked the beginning of a short but particularly intense phase of commercial disruption [in the cacao trade].  Napoleon’s crack-down on neutral shipping elicited a British counter-blockade, followed by a United States embargo in 1807.  Napoleon also seized northern Germany, formerly the main conduit for cocoa destined for Spain.  Prices were driven sky high in Amsterdam.  Hanseatic merchants reacted to this unprecedented crisis by adopting Danish or Portuguese colours to bring Hispanic American cocoa to Europe.  A Hamburg firm, financed from the Netherlands and registered in the Danish enclave of Altona, sent two large ships to Cartagena in 1806, bringing back cocoa and other tropical commodities.  However, the firm then suspended payments, because of the bankruptcy of a Dutch concern.  Hamburg ships also loaded cocoa in Callao in 1807, destined for Altona and Lisbon, but at least one was seized by British naval vessels (3).

Even before the Orders in Council or Embargo Act of 1807, neutral shipping to northern Italy began to be impacted.  On March 14, 1807, the American ship Vermont (Captain Simeon Lyman) was captured by French privateers near Livorno (the then-dominant port for northwestern Italy) with a varied cargo, including cacao, sugar, and cassia.  Despite a favorable ruling from the Council of Prizes at Paris, the Council of State reversed the prize court on April 30, 1808, resulting in the forfeiture of most of the cargo to the captors (4). 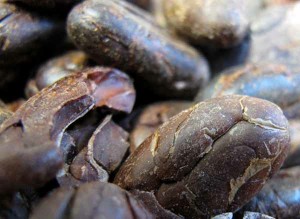 Within a year after the Berlin Decree, the flow of goods to the northern Italian peninsula was constricted even further.  Genoa was effectively closed to trade by the combination of French enforcement by land and British blockade by sea.

To clamp down on smuggling and importation of British goods under neutral flags farther along the coast, Napoleon sent General Miollis with a French army to Etruria.  Following Miollis’s arrival in Livorno on August 29, 1807, neutral vessels and cargo then in harbor and those subsequently arriving were promptly sequestered.  Miollis demanded a stiff ransom to release the ships and their cargo.  A delegation of neutral consuls, merchants, and the port’s chamber of commerce visited Napoleon in Paris with pleas for leniency.  Napoleon backed Miollis to the hilt, even raising the ransom.  (When the ransom was paid, Miollis then levied the owners 45% of the value of their property, coming back later for 8% more.)  The twelve American ships affected by Miollis’s enforcement held varied cargoes, including cacao and sugar (5).

By the middle of 1808, Miollis’s enforcement actions had virtually destroyed the commerce of Livorno.  Prices rose to such an extent that Thomas Appleton, American Consul in the port city, recommended that his countrymen run the risk of smuggling.  The American schooner John (Captain James Clayton) was taken by French authorities at the port on August 19, 1808, and subsequently condemned, with a cargo of South American coffee purchased for $53,000, that would have sold at Livorno for over $250,000 (6).

From the ports most proximate to Piedmont (Genoa and Livorno) to those in the Papal States and northeastern Italy, enforcement of the Continental System proved particularly disruptive.  As Harrison puts it, “The most significant commentary, however, on the working of the Continental System in Italy is the fact that those who actually experienced it—the consuls at the hungry ports, and the merchants from the glutted English markets at nearby Malta and Sicily—were uniformly impressed with its effectiveness” (7). 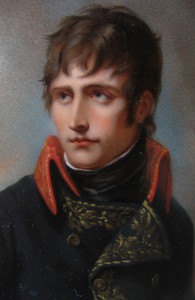 Aggressive increases in French customs tariffs, beginning even before the Berlin Decree, compounded the problem.  From 1802-3, French customs rates for cacao were 50 and 75 francs per 100 kilograms (for French and foreign goods, respectively).  Following the Customs Tariff of 1805, the rates for cacao increased to 95 and 120 francs.  Decrees in February and March of 1806 took rates to 175 and 200 francs (8).  Continental chocolate makers and consumers were stung by the tripling of customs rates in such a short period.

Scarcity drove prices higher, giving rise to rampant, lucrative smuggling operations.  Napoleon responded to the profiteering of smugglers with more customs rate increases for key colonial commodities.  Under the Trianon Tariff of August 5, 1810, the rate for cacao soared to 1,000 francs per 100 kilograms—twenty times the rate just seven years before.  To further tighten the screws, the Fontainebleau Decree (October 18, 1810) enhanced penalties for smugglers (e.g., ten years of penal servitude or even branding) and ordered the public burning of contraband (9).  Harrison observes that, in Piedmont, “many such burnings are reported about this time” (10).

It is against this backdrop of dramatic international strife that a common version of gianduia’s origin myth unfolds.  With a scarcity of cacao and exorbitant prices arising from the Continental System, resourceful Piedmontese confectioners began to stretch their supplies of cacao by admixing locally abundant hazelnuts (11).

As myth, the story is powerful.  It shows necessity spurring invention.  The confluence of historical forces culminating in gianduia appeals to the teleologically inclined, intimating fate or destiny in the confection’s birth.  The myth demonstrates the power of seemingly insignificant individuals to find beauty in the midst of war and privation.  Casting gianduia’s creation in the context of world-historic personalities and events elevates and aggrandizes what might otherwise be “just another product.”  However, a product it is; and the myth proves useful to business interests—from small import shops to enormous multi-national corporations—that happily exploit it as a marketing hook (12).

As we will see, though, the myth is historically insupportable. 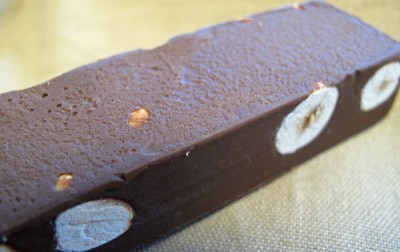 12.  The text on the side of a Venchi nocciolato bar (i.e., gianduia with whole roasted hazelnuts) sitting on my desk reads in English on one side and Italian on the obverse, “Gianduia finds its origins in the period of the Napoleonic wars, when the powerful English navy reduced the import of cacao all over Europe.  Piedmont chocolate makers tried to solve this problem by transforming hazelnuts into a delicate paste and combining it with cacao, which was becoming a rare ingredient.”  From a Zingerman’s newsletter dated June 7, 2007, “Gianduia was born out of necessity during the Napoleonic Wars, when a naval blockade on imports made cacao scarce.  The chocolatiers of Piedmont decided to try substituting hazelnuts for some of the cacao in their chocolate recipes.”  Examples could be multiplied.