Since the word “gianduia” will appear repeatedly in this series, let’s shoehorn some brief comments on spelling and pronunciation before moving forward.

Readers familiar with gianduia and gianduiotti may have occasionally seen the words spelled differently, with the letter “j”: gianduja and giandujotti.  The “j” spellings appear in many late nineteenth century Italian publications and, indeed, continue in use today in some advertising and popular media. 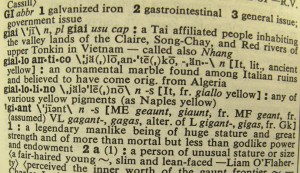 Unabridged, but no Gianduia

There are no hard and fast rules for resolving these spelling discrepancies.  Though English and American pastry chefs and chocolatiers have been familiar with gianduia for over a century, the word still does not appear in English dictionaries (1).  The word’s absence from the most common and authoritative unabridged and historical dictionaries implies that it has no standard, recognized spelling in the English language.

The lack of an accepted English spelling requires that we look to Italian.  While both spelling variants have appeared in Italy over the past century and a half, there are reasons to favor the “i” spellings.  Every major Italian dictionary for over a hundred years has spelled gianduia and gianduiotti without a “j” (2).  This represents consistent Italianization, as the Italian alphabet does not include the letter “j” (i.e., i lunga) (3).  Modern edited publications generally conform to the official spelling, not excepting Turin’s daily newspaper (La Stampa) and the works of leading Piedmontese writers on chocolate, such as Mario Marsero and Gigi and Clara Padovani (4).

Looking to Piedmontese also fails to provide justification for the common “j” spellings.  Though Piedmontese is the source of the Italian word Gianduia (i.e., the puppet/mask), it was spelled “Giandouja” or “Giandoja” in the dialect (5).  Therefore, “gianduja” is technically a misspelling, whether in Piedmontese or Italian.

“Gianduja” and “giandujotti” represent imperfect, late nineteenth century Italianization of Piedmontese, before Italian dictionaries standardized the orthography.  By the time the proper Italian spelling was enshrined in dictionaries and lexicons, popular and commercial use of the “j” spellings had been firmly established.  For Turinese gianduia-makers, changing the spelling on packaging, advertising materials, molds, etc., would have been costly, with no tangible benefit. 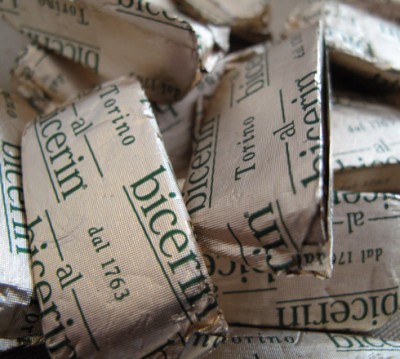 “Gianduja” and “giandujotti” remain in use in Piedmont today, most often in informal or commercial contexts.  Though misspellings, their origin in a transitional period for the language imparts a casual legitimacy to their continued use among Piedmontese companies, particularly those with nineteenth century pedigrees (6).

For our purposes—and those of lexicographers, should they ever get around to including the word in English dictionaries—“gianduia” must be preferred.  In addition to being the correct Italian spelling, it is more reflective of the word’s pronunciation.

Most butchery of the spoken word hinges on Anglophones’ confusion over how to pronounce the letter “j,” when they see “gianduja” (7).  Whether spelled “gianduia” or “gianduja,” the pronunciation is identical: john-DOO-yah.  “Gianduiotto”/”giandujotto” :  john-doo-YOH-toh.  “Gianduiotti”/”giandujotti”: john-doo-YOH-tee (8).   Watch and listen carefully to the video below so you’ll know how to pronounce the words in your head as this series continues (9).

For some examples of how not to pronounce “gianduia,” see the following (10):

2.  This includes the Italian equivalent of the OED, Salvatore Battaglia’s Grande Dizionario della Lingua Italiana (Vol. VI).  I have been unable to find any Italian dictionary published within the last century that even lists “gianduja” or “giandujotto” as acceptable alternate spellings, let alone preferred.

6.  Anyone outside that tradition who is familiar with the history and etymology of gianduia, yet spells it “gianduja,” courts poseurdom.

7.  In a recent trip to New York City, I heard waiters at Michelin-starred restaurants mispronounce “gianduja” (as it was spelled on the menus) three different ways: john-DOO-zhuh, zhahn-DOO-hah, and john-DOO-jah.  This could be avoided by lecturing waiters about how the vestigial “j” functions as a semivowel (specifically, the palatal approximant) or, alternatively, by simply spelling the word as “gianduia” to lessen the confusion.  The latter option seems more practical.

8.  These phonetic respellings aren’t perfect, but are close enough for government work.

9.  Special thanks to Kevin McCabe of the Associazione Piemontesi nel Mondo for assistance on mid- to late nineteenth century Piedmontese orthography.

10.  Apple scores points both for naming its Flash alternative “Gianduia” and for spelling the word correctly.