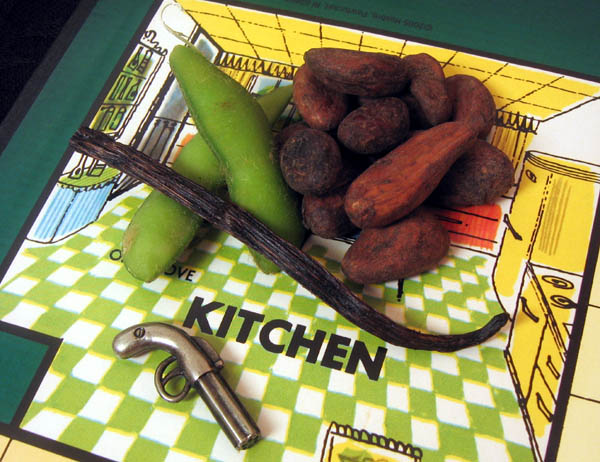 In Noka Part 6, I detailed my efforts to give the folks at Noka an opportunity to provide a direct answer to a direct question about their couverture. But, having strong doubts about whether Merrem or Houghton would be forthcoming, I decided to look into the matter myself—months before I even approached Noka about the interview. On to the analysis…

My initial approach to discovering Noka’s couverture source was simple process of elimination. There are a finite number of players in chocolate-making. The more one examines the qualities of a particular chocolate, the narrower the field of possible makers becomes. All we need to do is identify makers whose chocolate: (a) is single-origin; (b) consists of 75% cacao solids; (c) does not contain vanilla; and (d) does not contain soy lecithin. Since it’s theoretically possible that Noka could be buying couvertures from different makers for the different countries of origin, the process must be repeated for each of the four origins.

Venezuela. Venezuela contributes little volume to the cacao trade, not even ranking in the top dozen producing countries according to International Cocoa Organization statistics. But what Venezuela lacks in quantity, it makes up for in quality—particularly with flavorful, highly aromatic Criollo-Trinitario hybrids (and, in smaller amounts, with true Criollo beans). More premium makers have single-origin chocolates from Venezuela than from any other country—over a dozen, by my count, with several makers having multiple single-origins from different parts of Venezuela, using different bean varieties and subvarieties. Makers include Amedei, Domori, Pralus, Cluizel, Venchi, Bonnat, El Rey, Chocovic, Marcolini, Felchlin, Belcolade, Guittard, and Valrhona.

No vanilla. Of the 22 Venezuelan chocolates from the listed makers, 10 do not contain vanilla. The makers whose chocolates do not contain vanilla are: Domori, Bonnat, and Chocovic. (Bonnat has three varieties from Venezuela. Domori has a whopping six, three of which are also available in 100% bars and as whole, hulled, roasted beans, which can be broken up into nibs.) But, at 71%, Chocovic’s bar (Ocumare) doesn’t make the cut for cacao percentage. From more than a dozen makers, we’re down to two suspects.

We’re still down to Domori and Bonnat. So how do we break the tie? Added cocoa butter. As previously discussed in Noka Part 5, Domori does not add cocoa butter to that naturally contained in the beans. Bonnat—like the maker of Noka’s couverture—does.

Bonnat is the only chocolate maker I can find whose Venezuelan single-origins match Noka’s ingredient list.

Ecuador. Though Ecuador produces quite a bit more cacao than Venezuela—ranking seventh among cacao-producing nations—it is also a popular origin for premium chocolate makers. Of particular interest is the Nacional (or Arriba) subvariety of cacao. Though some argue that Nacional is a type of Forastero bean and others that it is a stand-alone variety alongside Criollo, Trinitario, and Forastero, there is general agreement that it is a “flavor bean” (like Criollo and Trinitario), having more flavor and aroma than the Forastero beans that dominate the industrial chocolate market. I was able to find a dozen makers with Ecuadorian single-origins, including Pralus, Plantations, Domori, Amedei, Dagoba, Bonnat, Belcolade, Chocovic, Marcolini, Felchlin, Guittard, and Hachez.

75%. Of that dozen, only three makers have Ecuadorian single-origins with 75% cacao solids. They are Pralus (Equateur), Plantations (Arriba 75%), and Bonnat (Equateur).

No soy lecithin. Of the dozen makers, three omit soy lecithin: Domori, Amedei, and Bonnat. Since Domori and Amedei fail the percentage cacao requirement and/or the vanilla requirement, we’re left with Bonnat.

Bonnat is the only chocolate maker I can find whose Ecuadorian single-origin matches Noka’s ingredient list.

Trinidad. Trinidad’s production today, though very small relative to the world market, consists almost entirely of “flavor beans.” Trinidad was the birthplace of Trinitario cacao—a hybrid of the hardy, disease-resistant (but rather dull and flavorless) Forastero and the fragile (but highly aromatic) Criollo varieties. Due to the island’s limited production and easier availability of Trinitaro beans from other countries, comparatively few makers have single-origin chocolates from Trinidad. I’ve only been able to find four: Amedei, Pralus, Bonnat, and Valrhona.

No vanilla. This ends the enquiry for the Trinidad couverture. Bonnat is the only one of the four that doesn’t contain vanilla.

No soy lecithin. Of the four, only Bonnat and Amedei lack soy lecithin. Since the Amedei comes in below 75% and contains vanilla, Bonnat is all that remains.

Bonnat is the only chocolate maker I can find whose Trinidadian single-origin matches Noka’s ingredient list.

Ivory Coast. I was only able to find two single-origin chocolates from Ivory Coast: Bonnat and Theo (a new maker based in Seattle). Why so few? It has nothing to do with scarcity of beans from the country. On the contrary, Ivory Coast has the highest output of any cacao-producing nation, and by no small margin. International Cocoa Organization statistics show Ivory Coast producing about 40% of the world’s cacao. (Ghana, at #2, produces about 18% of the world’s cacao.)

There are two very good reasons why most premium makers turn their backs on Ivory Coast. The first is that Ivory Coast produces exclusively Forastero cacao—bulk beans, suitable only for industrial makers.

The second, more troubling reason is that Ivory Coast is notorious for the use of child slave labor on cacao plantations. In 2001, Senator Tom Harkin and Representative Eliot Engel pushed for an amendment to the Agriculture Appropriations Bill that would require certification and labeling on chocolate indicating that child labor had not been used in its production. The chocolate industry reacted negatively, but the amendment passed in the House. In lieu of the amendment, Harkin and Engel brokered a voluntary agreement with the chocolate industry (known as the Harkin-Engel Protocol) aimed at the “Elimination of the Worst Forms of Child Labor.”

The 2004/2005 Annual Report of the International Cocoa Organization (released earlier this year) describes the history of the industry’s efforts to comply with the protocol. In its first survey of labor conditions in the cacao trade in West Africa, the industry determined that the majority of children working on the plantations were under the age of 14, that children working the plantations were less likely to go to school, and that 284,000 children worked in hazardous conditions on farms in Ivory Coast, Ghana, Cameroon, Guinea, and Nigeria. The 2005 deadline for the certification process called for by the Harkin-Engel Protocol was not met. It has now been pushed to 1 July 2008 and pared back, so that certification need only be in place and implemented for 50% of cacao-producing areas.

Bonnat is the only chocolate maker I can find whose Ivory Coast single-origin matches Noka’s ingredient list.

(According to a September 2005 newsletter on Bonnat’s web page, they anticipate eliminating their Ivory Coast chocolate and replacing it with a single-origin from Gabon. The decision was said to be based on the continuing decline in quality of beans, due to “agitation” in the country.)

Process of elimination yields only one possibility for each of Noka’s four chosen countries of origin. In each case, the name is Bonnat. Could it be simple coincidence? Perhaps.

But, if so, consider an even greater coincidence. I’ve learned that Noka has been planning a new line of chocolates, dubbed “Founders Reserve.” (Perhaps Houghton and Merrem are unaware that this is the name Guittard has been using for its line of single-origin couverture, which is sometimes available locally at Sur la Table.) The Founders Reserve line is to consist of three additional single-origin chocolates with 75% cacao solids, from Venezuela, Madagascar, and “Ceylan.”

We’ve already seen that Bonnat is the only chocolate maker with a Venezuelan single-origin that fits Noka’s ingredient list. And, as previously mentioned, Bonnat has three different Venezuelan chocolates: Hacienda El Rosario, Puerto Cabello, and Chuao. All are 75%. All avoid vanilla and soy lecithin. All add extra cocoa butter. We have a match.

I can find about seven makers of Madagascar single-origins. With Criollo-Trinitario hybrids, Madagascar is one of the few African sources of “flavor beans.” Makers with Madagascar single-origins include Pralus, Domori, Cluizel, Amedei, Bonnat, Guittard, and Valrhona. Of those, only two have 75% cacao solids: Pralus and Bonnat. But, as we’ve seen before, Pralus contains vanilla and soy lecithin. Bonnat is the only available match. 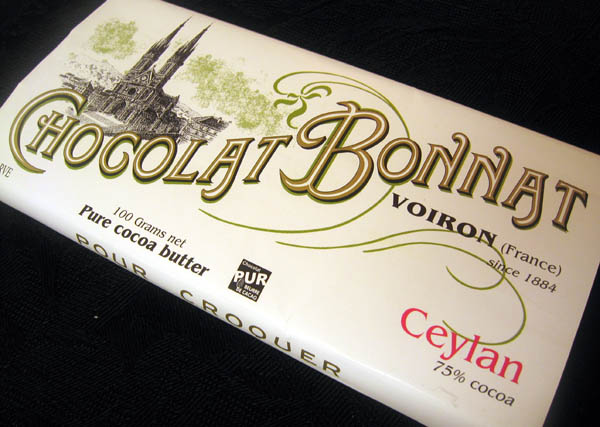 Either Noka is buying couvertures made by Bonnat, or Bonnat has a mysterious, chocolate-making doppelgänger that mimics its product line down to the smallest detail.