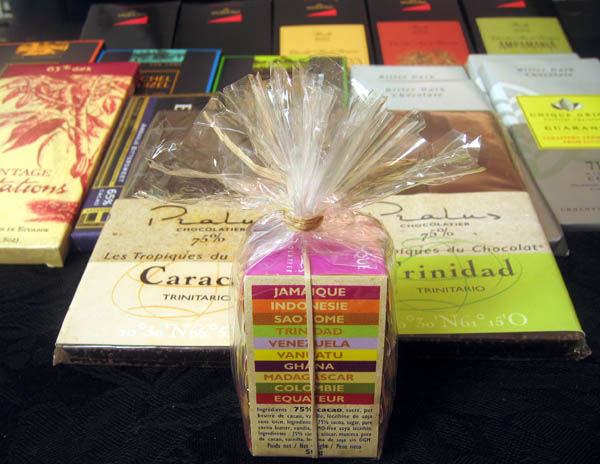 In Noka Part 4, we discussed the limited skill and technique involved in Noka’s work as a chocolatier. But, in fairness, Noka’s founders rarely make claims about their skill in working with chocolate. No, their greatest boasts are of the chocolate itself. And to that we must now turn our attention. Onward…

What makes the couverture that Noka buys so special? Houghton and Merrem often point to the following factors: (1) it is dark chocolate, with a minimum of 75% cacao; (2) it is single-origin chocolate; (3) it doesn’t contain vanilla or vanillin; (4) it doesn’t contain soy lecithin; and (5) it doesn’t contain any additives, preservatives, or artificial flavorings or ingredients. As they say in the FAQ on their web page, “Our passion is tasting real chocolate, in its rarest and purest form….”

Before discussing each of these allegedly distinctive factors in turn, I’d like to briefly note some conceptual problems with Noka’s goal of offering chocolate in its “purest form.” For starters, the ideal of “purity” only makes sense if a purer product tastes better than a less pure product. A chocolate that contains no sugar is obviously purer than one that contains about 25% sugar by weight. But unsweetened chocolate—even from the best makers using the finest beans—is stiff stuff that few tasters would prefer. Noka implicitly recognizes this, since they’ve chosen to offer chocolates with 75% cacao solids rather than 100%.

But, even beyond that, what sense does it make to speak of “purity” when dealing with a processed food? Cacao pods are not “chocolate.” Cacao beans are not “chocolate.” Ferment, dry, roast, crack, and winnow the beans, and you’re left with cacao nibs, which are closer, but still can’t properly be called chocolate. All of these processes are manipulations of the natural ingredient, intended to make it more palatable. By the time you get from cacao pods to “chocolate,” you have something that tastes much better, but is also less natural and pure.

The ideal of purity is also at odds with the history of chocolate. In the interview with Jennifer Parigi referenced previously, the folks at Noka said, “Ever since the ancient Mayans discovered the exotic flavors of the cacao bean in 250 to 900 AD, mankind has experimented and transformed this marvelous wonder into innumerable chocolate concoctions. But how many of us today have savored the flavor of real chocolate—as pure, rare, and flavorful as the ancient Mayans once relished?”

The question was rhetorical and the expected answer was “none” (or at least not many). But what the ancient Mayans relished was not solid chocolate as we now know it. Rather, it was a thick, gritty, generally unsweetened frothy beverage composed of ground cacao beans, water, and other spices and flavorings, frequently including vanilla, ground mamey pits, ear flower, chiles, and/or nixtamalized maize (i.e., masa). I’ll grant that not many of us have savored anything like that. If we did, we’d probably spit it all over the front of our shirts, just like the Spaniards did when they first encountered the concoction.

My point is twofold. First, the idea that Noka is somehow recovering past foodways (e.g., that of the Mayans) is flat out wrong. (By the way, the Coes have argued persuasively that domestication of cacao predated the Early Classic Mayan culture and probably goes back to the Olmec.) Second, from the earliest known use of cacao beans up until today, the dominant and universal practice has been to “adulterate” chocolate with spices, sweeteners, and other flavorings. The Mayans did it, as did the Aztecs, Spaniards, French, Italians, English, and Americans. “Purity” has never been the goal.

Now let’s take a look at each of the supposedly distinctive aspects of the couverture that Noka buys.

I guess I’m not as impressed by that as I’m supposed to be. After all, plenty of chocolate makers have product with 75% cacao solids or higher, including such fine names as Pralus, Domori, Amedei, Cluizel, and Valrhona. Moreover, judging a chocolate based on its percentage of cacao solids makes as much sense as judging a wine based on its alcohol content.

Second, the couvertures Noka buys are of single-origin chocolate (i.e., chocolate made with cacao beans from a single country of origin).

While we’re on the topic, I’d like to briefly discuss another point of confusion introduced by the folks at Noka. Single-origin chocolates are those made with beans from a single country. Single-plantation chocolates (or plantation bars) are made from beans from a single plantation within a country. In between those extremes are single-estate chocolates, made from beans in a particular growing region within a country. What are the couvertures that Noka buys? Their web site says their chocolates are “made with the rarest cacao sourced from exclusive plantations” and “made of the finest cacao from select plantations in a specific origin,” suggesting that they are specific to plantation. Their web site also describes their chocolate as “single-origin.” Then, on the “Corporate Gifts” page of their site and in e-mailed newsletters, they describe their product as “single-estate chocolates.”

Another point, before we move on. In describing the joys of single-origin chocolate in the FAQ on Noka’s web page, they state that:

Noka’s sales patter about terroir rests on very shaky ground. When speaking of terroir, it’s not sufficient to merely compare “apples to apples.” When we notice a difference between a Granny Smith apple and a Fuji, we’re not tasting a difference in the “soil and climate” where the two apples were grown, but rather a genetic difference in the cultivars. Noka’s chosen countries of origin offer each of the three prevailing cultivars (and one noted subvarietal) of Theobroma cacao: Forastero (Ivory Coast), Trinitario (Trinidad), Criollo-Trinitario hybrid (Venezuela), and Nacional (aka Arriba, a type of Forastero in Ecuador). So in considering the couvertures that Noka buys, a more fitting analogy would be comparing a California Merlot with a French Chardonnay. There’s definitely a difference, but terroir plays no noticeable role in that difference.

Third, the couvertures that Noka buys do not contain vanilla.

Yet vanilla has been a common constituent of chocolate since the Mayans. It’s a classic, effective flavor pairing. As Brillat-Savarin wrote, “To sugar…and cocoa is joined the delicious aroma of vanilla, and thus is obtained the ne plus ultra to which this preparation can be carried.” Avoidance of vanilla is not an unqualified virtue. But, even if we grant that it’s a great idea, plenty of quality chocolate makers are going that route, undercutting the distinctiveness of the couverture that Noka buys. Dagoba, Domori, Chocovic, Theo, and Plantations, for example, all make chocolates without vanilla.

Modest amounts of lecithin are commonly used in chocolate-making as a way of increasing the fluidity of the cacao paste, so it can be poured into molds more easily, producing a glossier surface and fewer air bubbles. It is not a flavoring agent or a preservative. Apart from the goal of “purity for the sake of purity,” it’s not at all clear why a chocolate made without lecithin would be superior to one made with it. Many highly regarded chocolate makers use lecithin, including Valrhona, Pralus, El Rey, and Marcolini. But several makers also forego lecithin, including Domori, Cluizel, Theo, and Amedei. Noka’s chosen couverture is not unique in this respect.

Fifth, Noka’s chosen couvertures do not contain any additives, preservatives, or artificial flavorings or ingredients.

With that said, I’ll posit that the couverture Noka buys does contain an additive: cocoa butter. Many chocolate makers add extra cocoa butter (beyond that naturally contained in the beans) to their chocolate. The cocoa butter adds fluidity in molding (similar to the role played by soy lecithin) and mouthfeel to the finished product. Cocoa butter does not add any flavor or aroma. Based on Noka’s ingredient list, the supplier of Noka’s couverture adds extra cocoa butter to its chocolate.

To some degree, this undermines several of Noka’s boasts. First, the claim that the chocolate contains no additives is questionable, when extra cocoa butter is being added. Second, since cocoa butter is considered a cacao solid for purposes of calculating the chocolate’s percentage, Noka’s 75% will contain less cacao liquor (and therefore less flavor and aroma) than that of a maker whose 75% consists of undiluted cacao mass. And, third, added cocoa butter raises questions about whether the couverture is single-origin, in the strictest sense. Cocoa butter is almost always a byproduct of industrial chocolate-making operations (i.e., the pressing of cacao mass to produce cocoa butter and presscake, which is then ground to make cocoa powder). Few small chocolate makers produce enough extra cocoa butter (if any) to add back into their chocolate, so they buy it from industrial chocolate makers who are usually working with low-grade Forastero beans out of Africa. If part of a chocolate’s percentage is derived from cocoa butter with a different country of origin than that of the cacao liquor, is it a true single-origin? I can’t state with certainty that the added cocoa butter in the couverture Noka buys comes from an industrial chocolate maker. But I strongly suspect it is.

I only go on at such length about the cocoa butter because some chocolate makers refuse to add extra cocoa butter to their chocolate, due to its dilutive effect on flavor and aroma. Domori’s Château line, for instance, consists of only cacao mass and cane sugar, making it “purer” than the couverture Noka uses. Noka’s claim, on its web site, of selling “the purest chocolates in the world” is therefore demonstrably false.

So, going back to the original question, what makes the couverture that Noka buys so special? The answer, as far as I can tell, is “nothing.” There’s little that can be said of the couverture Noka buys that isn’t equally true of chocolates from a number of premium makers.