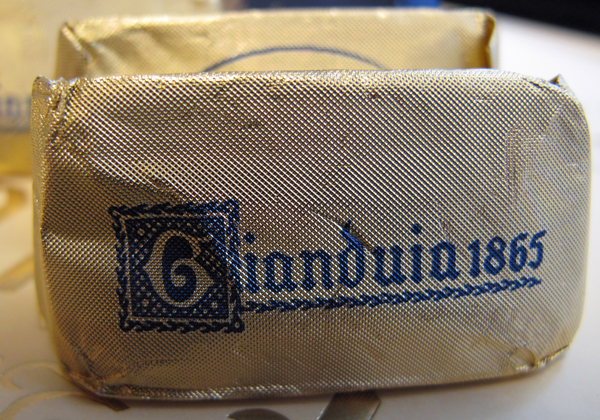 We now jump forward to the 1930s.  It was in this decade, between two World Wars, that the myth of gianduia was defined.  Though a number of historical factors converged to elevate gianduia in this period (some of which will be discussed in Part 17), two of the key players were Walter Bächstädt and Paolo Audiberti (1).

The Great Depression took a toll on Succ. Caffarel Prochet & Co. in 1929 and 1930.  With sales languishing, debts mounting, and difficulty in attracting new investors, the company ceased production and began to wind up.  Placing little value on the company’s goodwill, the liquidator, Giuseppe Zuccarelli, created a new company in 1931 (i.e., Suprema S.A. Fabbrica Cioccolato, Caramelle e Confetti).  The newly capitalized company soon reverted to the prior name (to avoid the expense of new molds, letterhead, packaging, signage, etc.), and selected a three member administrative board.  One of the three administrators was Walter Bächstädt (2). 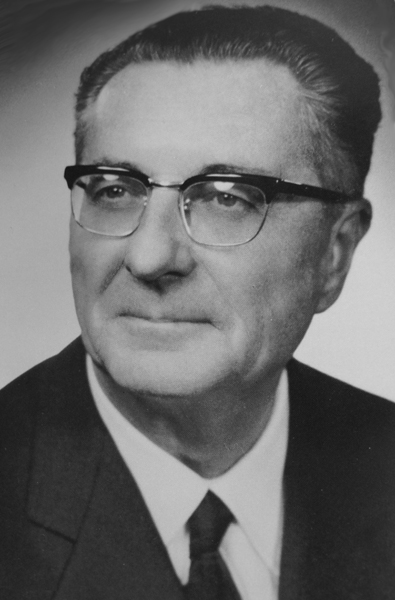 Walter Bächstädt was born in Turin in 1904 (the year of Michele Prochet’s death), but raised in Germany.  Bächstädt met Paolo Audiberti in Turin while both were working for a German-owned tire company—Audiberti in management, Bächstädt in sales.  Bächstädt heard of the plight of Succ. Caffarel Prochet & Co. through family.  (His grandmother was Noelie Charbonnier—widow of Ernesto Malan, Michele Prochet’s partner from 1897.)  He approached Audiberti about purchasing the company and, despite their youth, they left the tire industry for chocolate (3).  Walter Bächstädt was appointed President of the company’s board in 1931 and Audiberti as Vice President in 1933.  Together, Bächstädt and Audiberti planned the company’s reemergence.

Their early efforts to revive the company coincided with the publication of Cagliano’s 1932 article in Il Dolce (4).  While it is clear that Succ. Caffarel Prochet & Co. was Cagliano’s principal source for the section on gianduia, we do not know how or when the company communicated the information to the author.  There is no evidence, at present, to conclude that Cagliano communicated with the company while Zuccarelli, Bächstädt, and Audiberti were reinventing it in the early 1930s; but the company’s new leadership wasted no time in exploiting the article for marketing purposes.

Bächstädt and Audiberti began to modernize, upgrade equipment, establish trademarks, and focus product lines.  As part of this reorientation, the company fully embraced the historical identity provided by Cagliano.  While gianduiotti had formerly been but one specialità della casa out of many, they soon became the company’s signature item (5).

On October 26, 1936, Caffarel Prochet & Co. applied for a trademark in Gothic script that read “Gianduia 1865” (6).  The application was granted in January of 1937 and the mark began to appear on packaging, promotional materials, and the individual foil wrappings of gianduiotti. 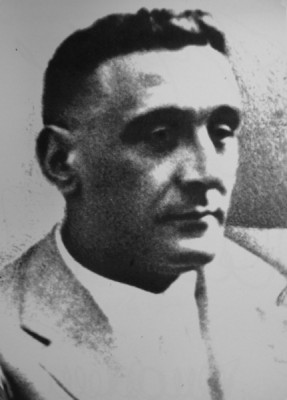 That same year, during Turin’s tenth annual Trade Weeks, a Caffarel Prochet & Co. booth included a sign board featuring the new mark.  Tacked to the board was an unfurled parchment briefly setting forth, in Gothic script, what  became the company’s official story, including the claim that “Caffarel Prochet” began marketing givo in 1865 (7).  The anachronistic name demonstrates a lack of awareness of the fact that Caffarel and Prochet were unaffiliated in 1865.  As a more amusing example of this sort of historical laxity, a Caffarel display at the 1952 INTERSUC show in Paris featured a large, framed illustration of the company’s factory in Turin in 1826 with signage for “Caffarel Prochet Gay & Co.,” even though in 1826 the factory was still under control of the widow Watzenborn and Bianchini, Paul Caffarel had not yet moved to Turin, Michele Prochet had not yet been born (and would not be for another thirteen years), and the then-unborn Enrico Gay was never a partner of any Caffarel (8).

Errors of that sort are understandable, given the turnover in ownership and management of the company in the early 1930s and several times over the preceding three decades (9).  Of greater interest, however, the faux parchment on the 1937 Trade Weeks display stated that the product’s name change occurred during the Turin carnival of 1869.

The 1869 date contradicts the 1899 Succ. Caffarel Prochet & Co. statement (made when Michele Prochet was still alive and at the helm) averring that “it was only in 1867, at the time of the Fantastic Fair of Turin, that this nickname [i.e., givo] was changed to that, most appropriate and characteristic, of Gianduia” (10).  As shown in Part 14, the text of the alleged 1869 parchment does not substantiate any key element of gianduia’s origin story: not who invented it, not when it was invented, and not how it was named.  It does not even mention gianduiotti, givo, or any specific product.  As previously discussed, contemporary newspaper records reveal that the 1869 parchment was not a recognition of product quality or an authorization to call givo by Gianduia’s name, but one award out of twenty for the most beautiful booths at the fair (11).

It appears likely that Caffarel Prochet & Co., under the leadership of Bächstädt and Audiberti, created the 1869 naming myth by merging Cagliano’s claims about the 1867 carnival with a probably authentic—yet totally irrelevant—document found in the company’s files in the 1930s.  There’s a maddening circularity to this—a sense of historical bootstrapping.  Cagliano, relying on Caffarel Prochet & Co., describes a document (which he does not even claim to have seen) that purportedly establishes several key facts; then Caffarel Prochet & Co. relies on Cagliano to affirm those and other facts (many of which are demonstrably false) in a marketing push to position itself as the originator and true heir of the gianduia tradition. 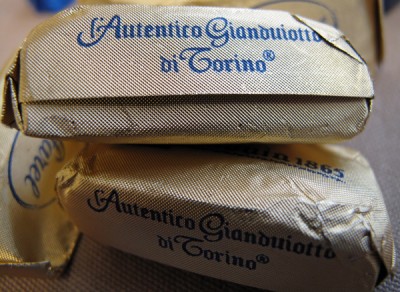 As improbable as it may seem, Caffarel Prochet & Co.’s campaign was successful, not only in making gianduiotti a signature product, but in casting an enduring myth about the company’s role in gianduia’s invention and naming.  Despite the paucity of historical evidence, Caffarel has continued to maintain its claim to the 1865 invention of gianduia.  The “Gianduia 1865” trademark first established in 1937 has been repeatedly renewed and continues in use today (12).  On May 6, 1970, Caffarel applied for an additional trademark coupling the established “Gianduia 1865” mark with “The Authentic Gianduiotto of Turin” to further bolster its image as gianduia’s original creator (13).

If gianduia did first emerge in 1865, the latter half of its 145-year history has essentially been an echo chamber for Caffarel marketing.  The origin story promulgated by the company’s new owners in the 1930s has been heavily reinforced through repetition in advertising, newspapers, magazines, travel guides, popular food histories, cook books, and most recently the Internet.  That feedback loop must be broken, if we are to work towards a historically tenable account of gianduia’s invention.  That means being specific and judicious about sources, acknowledging the uncertainty of our knowledge, and continuing the search for more and better information (14).

1.  Apologies for the sudden leap forward.  Since, to this point, the series has been as much a historiography of gianduia, it makes sense to finish the discussion of how the prevailing myths appeared, before moving on to examine gianduia itself.

4.  The role of Cagliano’s article in propagating false and dubious claims about Caffarel, Prochet, and gianduia has been discussed previously in Parts 3, 9, 13, and 14.

7.  Caffarel, 349.  The Trade Weeks display was not an isolated incident, but part of an extended campaign.  Fifteen years later, the company produced a similar display for the Milan Trade Fair, complete with faux parchment, Gothic script, and virtually identical language describing the 1869 naming (Caffarel, 352).

9.  A cynical mind might postulate deliberate historical distortion by Succ. Caffarel Prochet & Co. in the 1930s.  For that to be the case, however, the company’s principals would have to possess a baseline knowledge of the historical facts.  If they had such understanding, they concealed it well.

14.  It seems fitting that the most rigorous and candid examination of Caffarel history is a recent dissertation by Christian Bächstädt-Malan—son of Hans Bächstädt-Malan (former General Manager of Caffarel) and grandson of Walter Bächstädt.  Through his mining of Caffarel records and archival sources in Turin, Luserna San Giovanni, and Torre Pellice, he knocked down a number of longstanding myths and provided the most complete picture, not only of Caffarel, but of any Piedmontese chocolate company.